Here are my first 3 AK47 / Bulanda Militia/militia in space. I struggled with painting them, and settled with bright colors. I wanted to achieve most non-proffesional look possible. So i started to play with extras. These guys defiantly raided some cargo ship containers with brand fashion en route from China :) 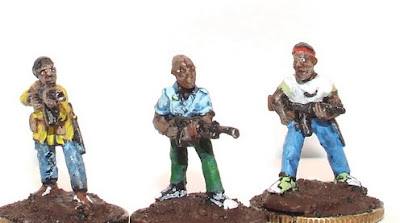 Ive been able to clothe them up with 5 recognizable brands, but some are hard to spot due to scale, my painting and unskillfull photograph. Models are OG15 African Militia. 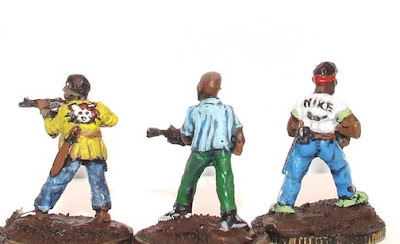 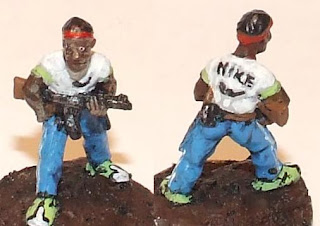 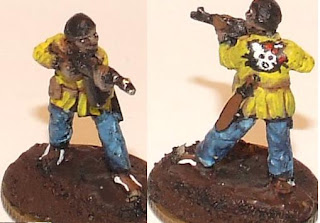 Serpentsis infiltrators are most feared group of Bulanda. Mere rumor of their presence forces local collonial force on patrol deep in to the interior and strengthening posts.   Because while not completely affiliated with Jade Throne serpentis infiltrator are sure sign that Imperial eye is looking at a planet..


Prior to Abundo incident there were no official Imperial Presence on the Bulanda. But Earth command accused  Serpentis infiltrators of supporting colonists with weapons and training the militias.

Few small groups were  tracked in the bush but none vere taken captive nor bodies vere recovered.. They seem to poses uncanny ability to leave no trace and disappear in thin air.


Official inquiry by the Board of Colonial Affairs resulted in Imperial response that "Only Imperial citizens present on the planet were agricultural experts hired by local entrepreneurs". 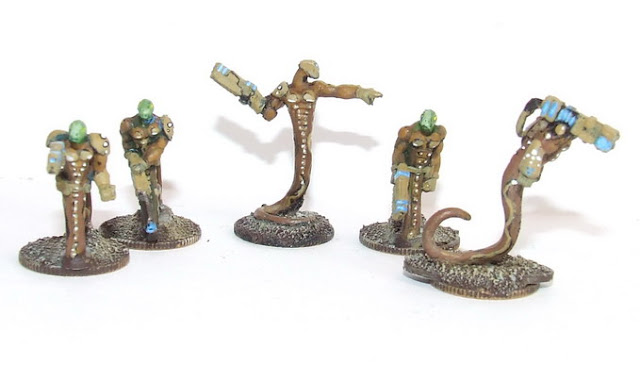 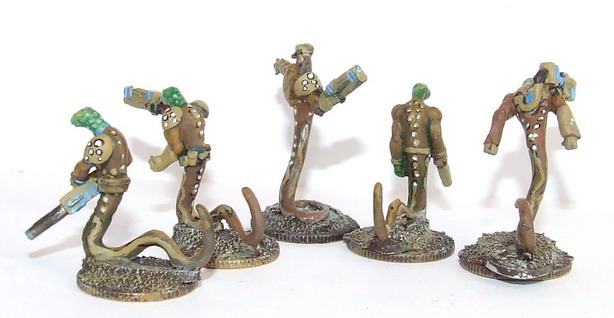 They lack grass on the bases as I am still bloody forgetting to order it..grrr
And i am not sure what to do with their hands ... But for now they are ready to kill some humans, ee I mean train some farmers  :)
Models are Critical mass games Astragar Mercs with a little help from Khurasan heavy plough :)
they were painted as test piece for whole platoon of Serpensis including team of Power armored snakes Ive converted with greenstuff.
Autor: AWu o 12:02 5 komentarzy:

Poland of Boleslav Chrobry - the Brave

Son of Mieszko The First, first historical ruler of Poland Boleslav The Brave (Chrobry) raised to power soon after Mieszko's death in 992. After beating and banishing his 2 brothers Mieszko and Lambert (whose should not be mistaken with Mieszko II Lambert – son of Boleslav the Brave who succeeded him ) Boleslav took the throne of in 992


„Bolesłav I was a remarkable politician, strategist and statesman. He was able to turn into a country that was not only comparable to older western monarchies, but he elevated it into the European elite. Bolesłav conducted successful military campaigns to the west, south and east. He consolidated the Polish lands and conquered territories outside of modern borders of such as , , Red Ruthenia, and as well as . He was a powerful mediator in Central European affairs.


Bolesłav I also managed to establish a Polish church structure with a Metropolitan See at , independent of German Archbishopric of Magdeburg, which laid claims to the Polish area. During the famous Congress of Gniezno he was able to officially free himself of tribute to and finally, in his most momentous act, he had himself crowned King, the first Polish ruler to do so.” From obvious reason it will be most interesting to list military exploits of Boleslav.


W know that by June of 992 he was unquestioned ruler of Poland after banishing his stepmother Oda and two brothers and destroying opposition and blinding of two most powerful enemies magnates Odylen and Przybywoj which crushed opposition so well that we don’t know about any other internal movements against him for whole reign. Quick action and ruthlessness was to be his trademarks.


In first part of his reign he was mostly concerned in internal reorganization and continual Christianization. He allied himself with young Emparror Otto III. He supported his expedition against Lusatians in 992.  And he organized Christianizing missions into pagan . Most important was mission of later Saint Vojciech (Adalbert of Prague) Czech prince and former bishop of who was martyred by Prussians in 997. Czech Premyslids of Bohemia refused to ransom his body and Boleslav bought it (paying its weight in gold) and put to rest in Cathedral in – Boleslav capitol. Wojciech was canonized as Saint Adalbert by Pope He was later made the patron saint of , , , and . Canonization of Vojciech increased the prestige of the Polish church in and the prestige of Polish state on the international arena.


In year 1000 one of most important events of Boleslav rule occurred in form of Congress of Gniezno. Emperror Otto III visited officialy in pilgrimage to grave of St Vojciech, but also for political meeting with Mieszko. Ottos Agenda was to federate and with Empire extending its universalistic rule much further than ever.


Boleslav was freed from tribute for the Empire, and was accepted as seat of first polish church metropolis with own polish Archbishop independent from and 3 new Bishopies. Most important was elevation of Boleslaw. Emperor placed his Imperial crown on Bolesłav I's brow and invested him with the titles frater et cooperator Imperii ("Brother and Partner of the Empire") and populi Romani amicus et socius. Boleslav also became Patrician of the Empire.


Unfortunately restoration of Empire was stopped by unexpected death of Otto in 1002. And his successor Henry II was opposed to his plans towards the east. Boleslav suported  Eckard I, Margrave of Meissen for Emperror throne and in the turmoil of succesion war took Margraviate of Meissen and March of Lusatia, including strongholds Budziszyn and Strzala. He then supported henrys claim, and was rewarded with as a fief but he had to give up on . But after few years Henry organized failed assassination attempt for Boleslav that lead to inevitable and long war. At same time in 1003 he helped Boleslaw III the Red in succession conflict in , but after new duke misconduct as a ruler and massacre of noble elites at Vyszehrad, Boleslav was asked by remaining nobles to remove Boleslaw III. Boleslav The Brave invited him to  and then blinded and imprisoned where he ultimately died in prison many years later. Boleslav The great was in position to claim Bohemian Crown for himself what he did capturing in 1003, also claiming upper () and Morawia which he both held until peace of 1018.


After capturing and in 1002 Boleslav now in conflict with new Emperror Henry, refused to pay him a tribute from these lands. Henry organized expedition allied with Slavic Lutetians. After campaign in 1004 Boleslav lost title and country of . And then in 1005 Henry recaptured and stroke attack into itself, where near Posen peace treaty was made according to which Boleslav lost Lusetia and (then in Emperrors hands) and denounced his claims to Czech throne.


Next war started in 1007 with Henry II denouncing the Peace of Posen,


Bolesłav attacked on the Archbishopric of Magdeburg and retook of marches of and including the city of .


In 1010 Henry organized counter offensive but it was not successful, in 1012 another peace was signed.


This time that was Boleslav who broken the peace, when in 1013 he invaded again. And after peace in Meresburg the same year Bolesław  paid homage to Henry II and in exchange received the March of Lusatia and Sorbian Meissen as fiefs. Aditionaly in 1013 his heir Mieszko Lambert (later Mieszko II Lambert) was married to Richesa of Lotharingien granddaughter of emperor Otto III.


In 1014 Boleslav tried to ally himself with Bohemian prince against Emperor Henry and refused to help Emperor in his Italian expeditions. That led to imperial intervention in in 1015 and another war started.


At first Emperor was victorious as he was able to defeat the Polish forces at Ciani in 1015. But later Bolesław  sent a detachment of Moravian knights in a diversionary attack against the Eastern March. So the Imperial army retreated from without making any gains. After repelling attack Boleslav took initiative and later that year defeated and killed  Margrave of Meissen, Gero II. And later sent an army led by Mieszko Lambert to plunder .


Later in 1017 Henry II invaded Poland second time  with help of Bohemians and Weneds and besieged city of Głogów – when he tied hostages to siege machinery in attempt to weaken defenders resolve but failed to capture the city and had to retreat..


Boleslav used excuse of Bohemians in Emperors army and sent Mieszko Lambert to invade Czech again which was meet with little resistance. That Forced Emperror to sign Peace of Budziszyn in 1018. that was total victory to Boleslav. Not only was he given Sorbian Meisen and Lusatia not as fiefs but as permanent parts of Poland but he was promised military support in a war against Kievan Russ and married to Oda daughter of  Meissen’s margrave.


First Boleslav’s expeditions in to Russ were in 1015. But he attacked decisively after peace of Budziszyn in 1018. He Invaded on behalf of his son-in-law Sviatopolk I of . He led huge army between 2 and 5 thousand of Polish troops. 1000 of Pechengs, 300 German knights ( provided as part of Peace accords of Budziszyn) and 500 Hungarian mercenaries.


23 July at the banks of the , he defeated the forces of Yaroslav the Wise prince of . After the battle Yaroslav retreated north to Novogrod and that left vulnerable.


City already besieged by mentioned Pecheng allies of Boleslav surrendered at 14 August at the sight of Polish army.


There are two legends about his entrance to the city. One official and second unofficial.


First that Boleslav notched his sword (Szczerbiec) hitting the legendary Golden Gate of Kiev. This sword was later used as ceremonial coronation sword of . Szczerbiec is single crown jewel of Piast dynasty that is surviving today (off course sword itself is from later times , and was first used in coronation of Wladyslaw Łokietek in 1320 , and was forged somewhere in XII or XIII century but official legend pints to this moment of 1018 and Kievs Golden gate) .


Second  is much more probable and tells that after cracking Golden gate of Kiev open Boleslav promised to his soldiers that as this gate cracked that will crack virginity of Yaroslav the Wise sister Predslava that was in the captured city.


Boleslav had to leave the city later this year after some disagreement with Sviatopelk but regained Red cities called later Red Ruthenia whose were in Polish hands till 1031.

After 1018 there were peaceful and quiet times but Boleslav did not lost his political predatory instincts . After death of his long time nemesis Henry II, Boleslav took advantage of the interregnum in and crowned himself king in 1025, thus raising to the rank of a kingdom.


He was the first Polish king (rex), his predecessors having been considered dukes (dux) by the and the papacy.

In 1015 Boleslav supplied his nephew Cnut The Gereat with unspecified cavalry forces in support of his conquest of . Cnut was crowned in 1016 as King of England with Boleslav help and support.


Previous post on early history of Poland:
Mieszko I and the Dawno of Poland 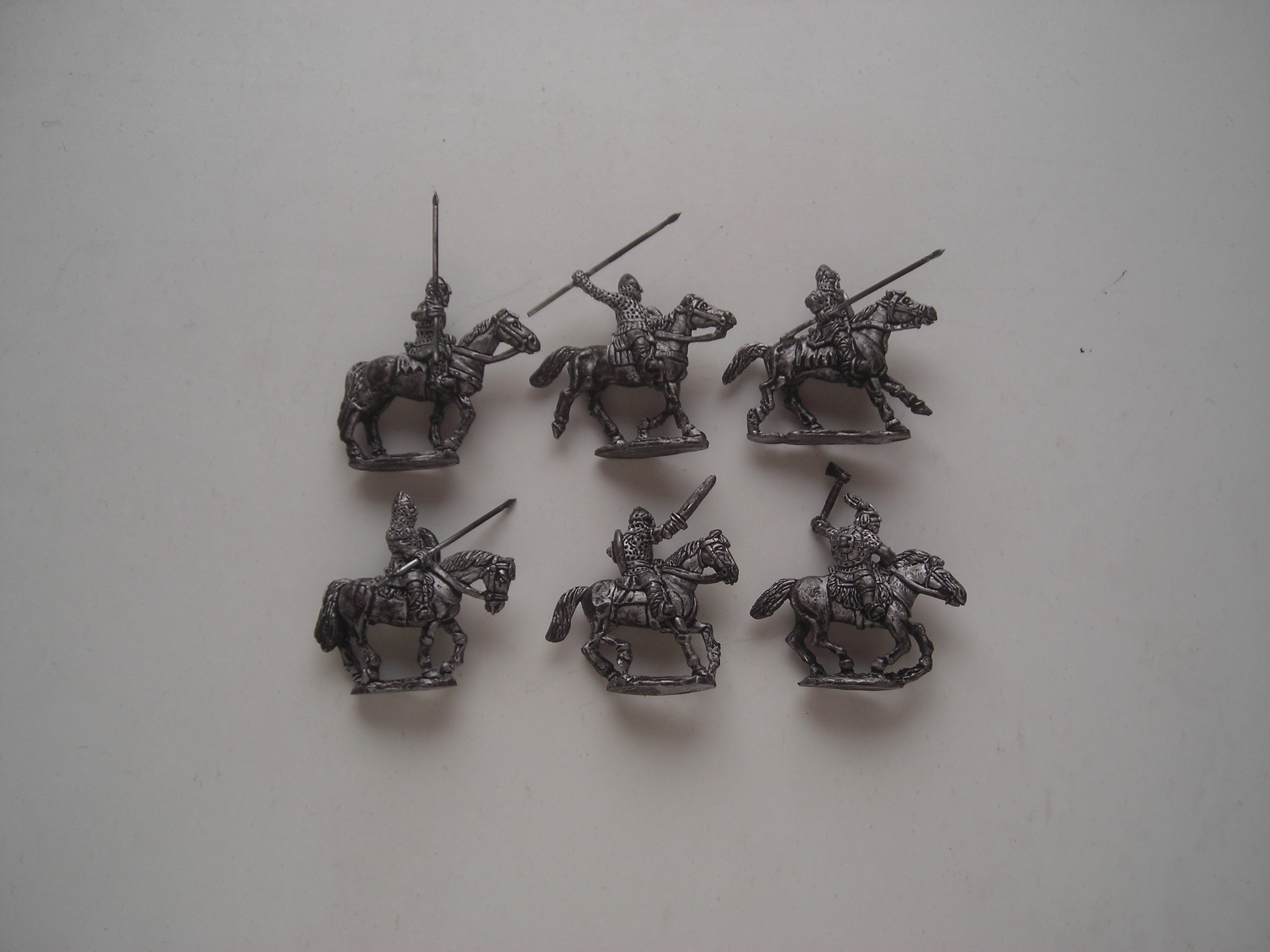 It is here.
Very nice models, i think i like them more than Mieszko Early Poles, especially infantry !

It is supposed to be sold in 3 sets.
Full DBA Army (around 55$ form 22 bases of full optioned DBA Army)
And in two smaller cheaper sets of All knight (+ 2 bases of dismounted)
And mixed 7 Knights element full and infantry)


They are probably not on QR miniatures webpage, if you are interested in them mail producer (contact mail is on the page)