Through Oder with the 1st Army part 2: The Battle - AAR nr 1

In the last post I gave outline of the campaign and scenario so now the first game itself.           Support roll showed that each of us would get 2 points. I was leading German side and chose Panzerknacker* team for my mere 2 point support while Sarmor playing the Polish  has chosen Maxim MMG and Pre game barrage for his sum of 5.

We started patrol phase from oposite corners and while Polish patrols went further  I ended up with better positions. 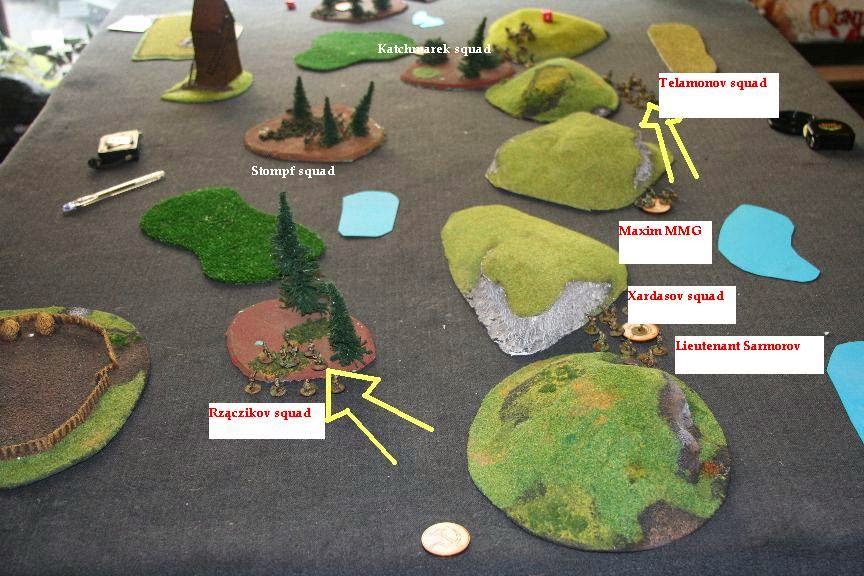 First 2 phases went to Poland and Sarmor managed to place all of his forces on the table and moved very aggressively against my deployment points. but then iI rolled 2 consecutive phases and with very lucky rolling for preliminary barrage managed to put two of my squads in. One in the middle... 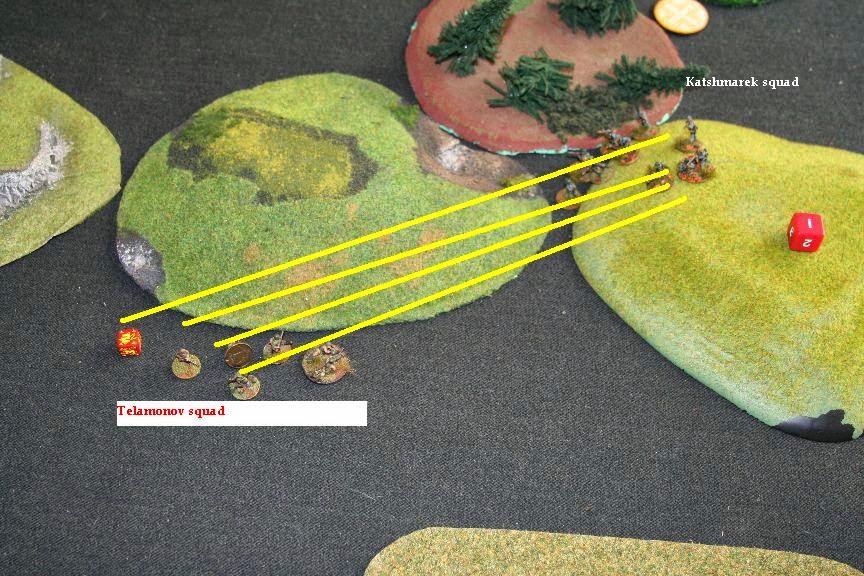 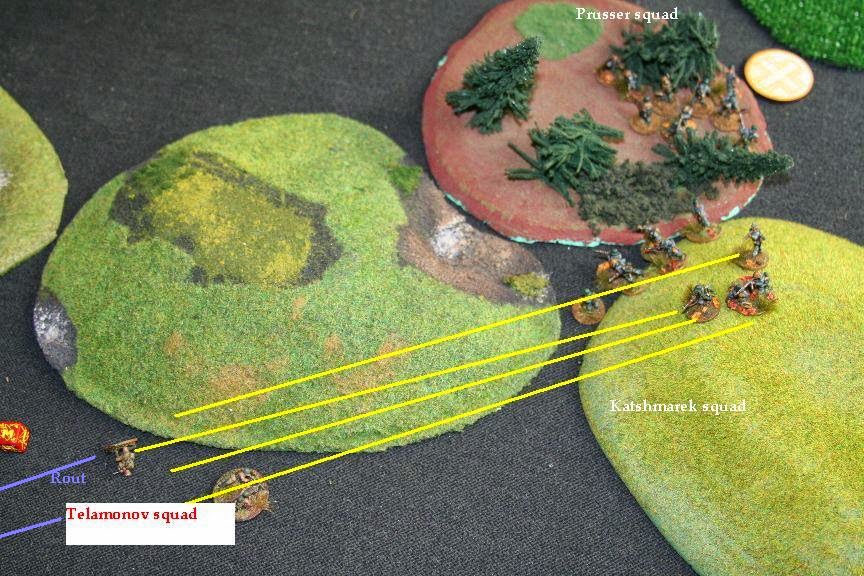 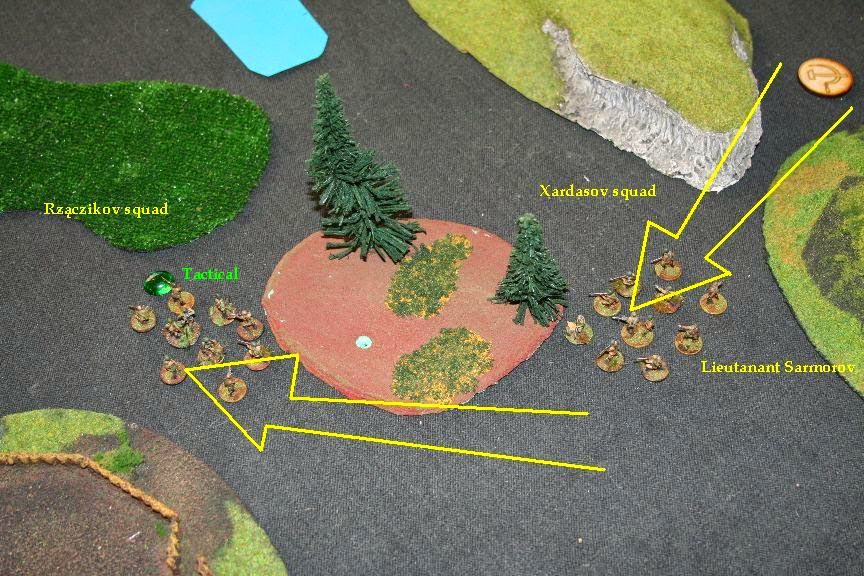 Unshaken by Telaomonv sudden demise Sarmorov charged rest of his men forward taking deep plunge into my right flank. But this time much more cautious. His men were crouching and hoping from cover to cover. Fast learner Sarmorov was.. 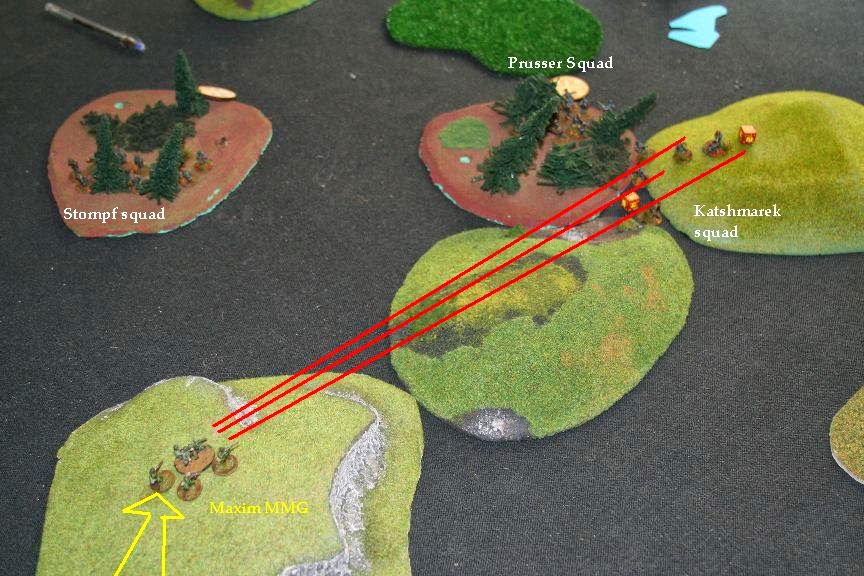 Maxim team took position on the embankment and started to inflict heavy casualties on victorious Katshmarek. But it was to late for realisation of a flaw in Sarmorow plans as whole German platoon concentrated fire on lonely MMG. Then I used my CoC dice to end turn which removed last two men of Telamonov squad from the table (and inflicted another blow for Polish morale. 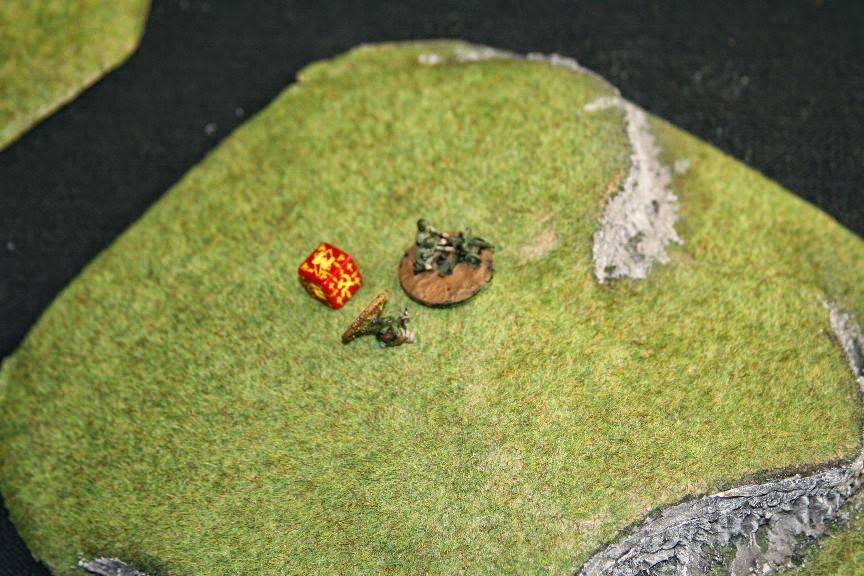 Next phase saw pinning MMG team and wounding of its commanding sergeant. That put Polish morale at 5. 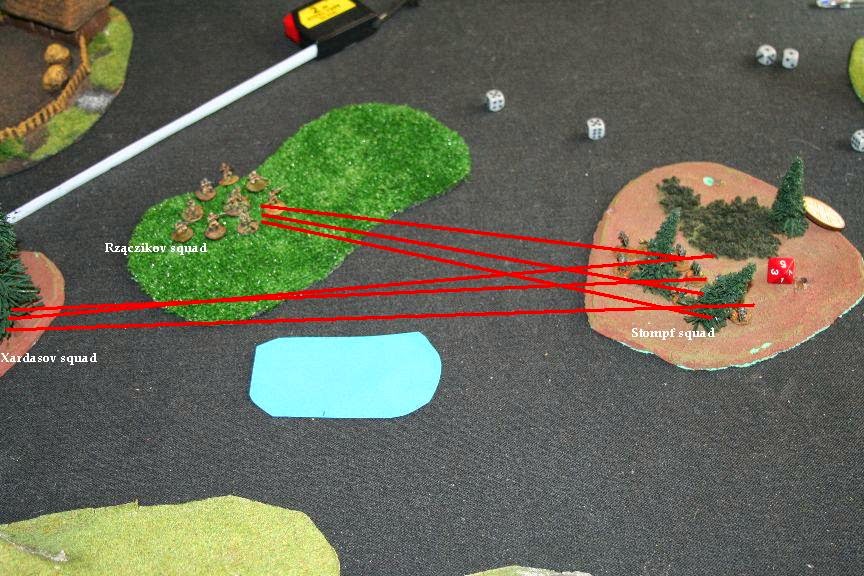 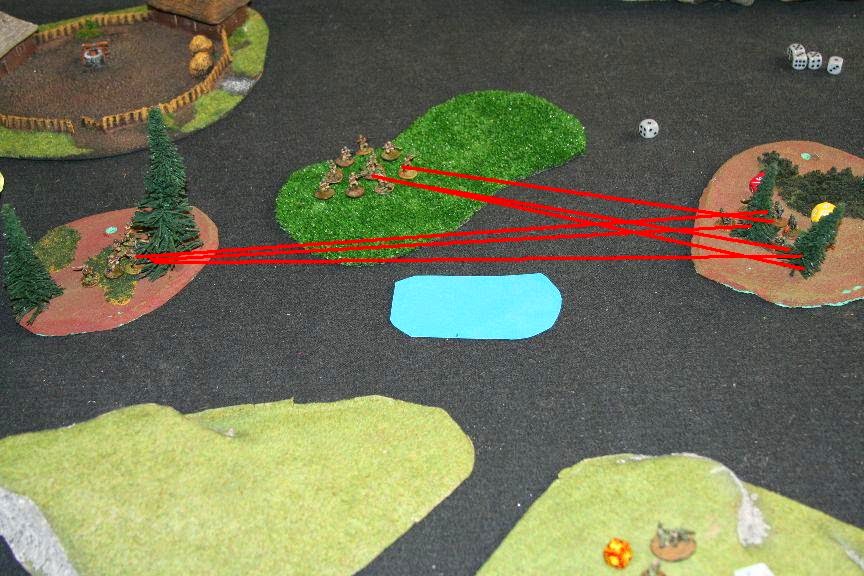 Then fate turned and two full squads on the right flank started to put concentrated fire at Stompf squad in the forest fast piling both shock and dead and wounded. 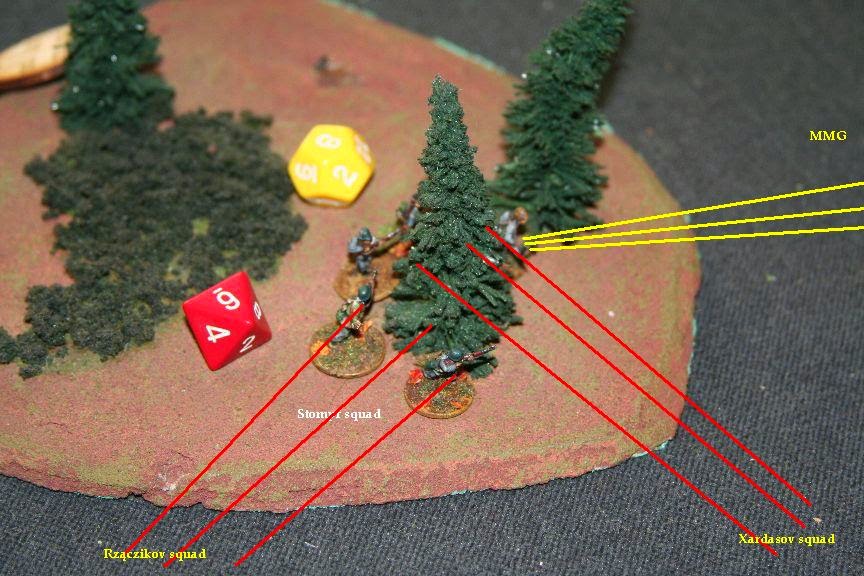 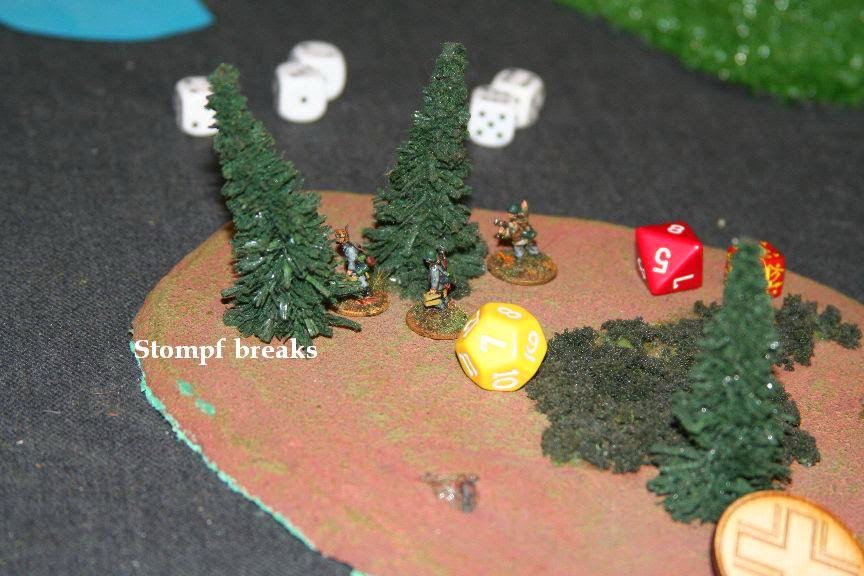 In last resort of initiative Stompf Squad killed MMG officer and loader breaking the remaining crewman. But then another round of deadly fire of Rzączikov squad - Sergeant Rzączikov unhappy with his men accuracy took Digtariev LMG himself and shown the squad how to use it - break it and sent to flight for safety. 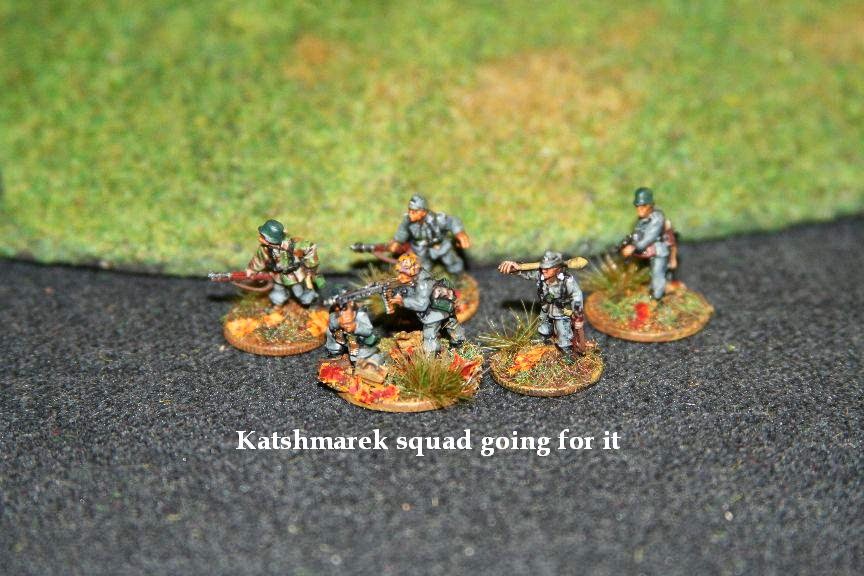 Katshmarek while being on the far left flank and out of the fray saw opportunity and used which resulted in his Iron Cross II class just after the battle. He charged through hasty Polish positions behind Embankment and captured lonely wandering helplessly MMG crewman. That put Polish at 3 morale and allowed my to deny one of their deploy points (i chosen further one) 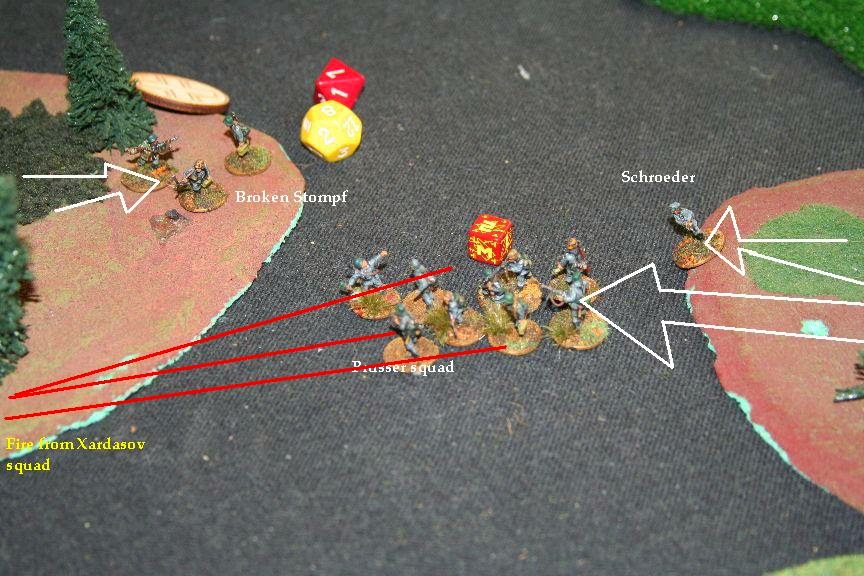 Meanwhile feldfebel Prusser ran his squad the the forest deserted by Stopmf squad, but took some heavy fire from Xardasov hidden in the clump of hazel resulting in casualties.. 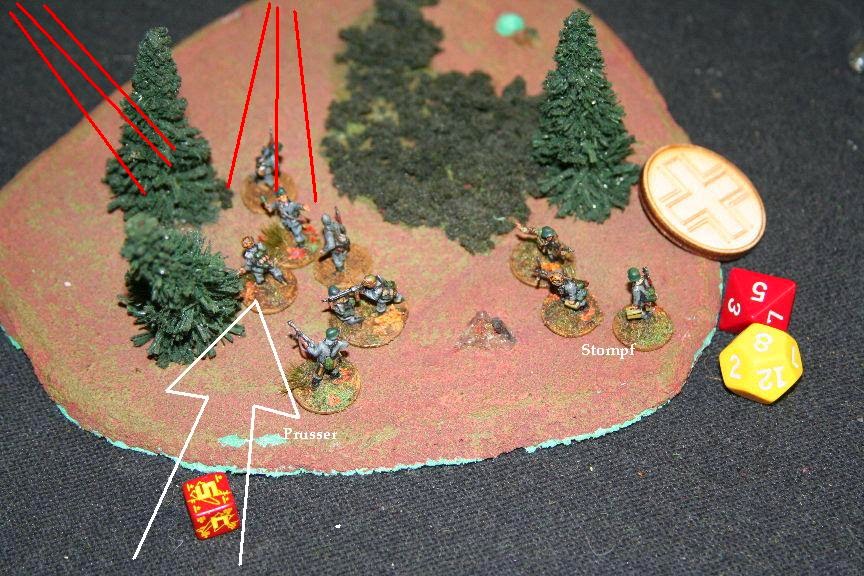 Before he reached position his squad accumulated a lot of shock and lost 3 men.. 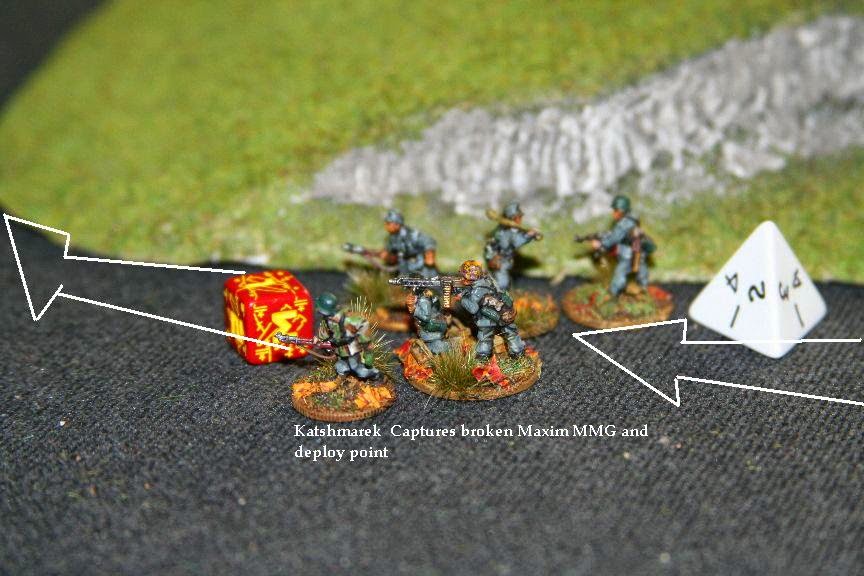 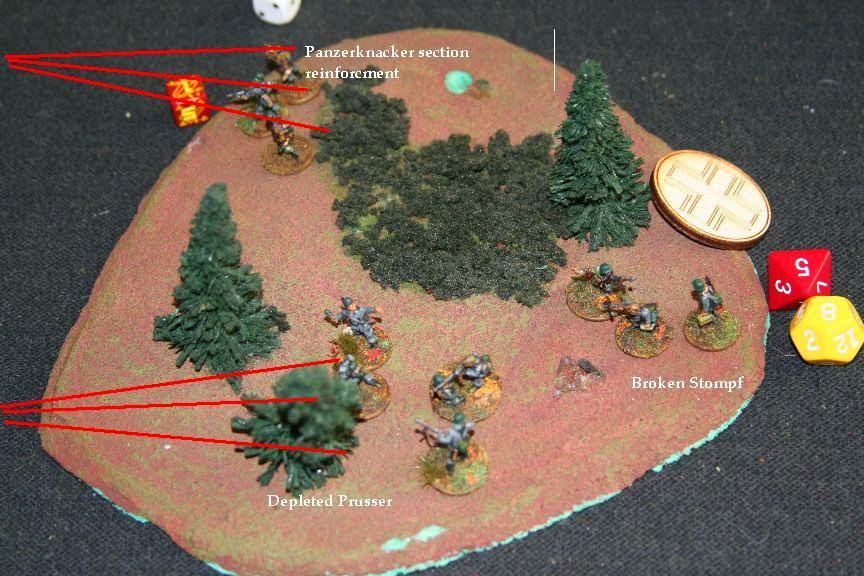 Germans managed to deploy their support asset which started to shoot in the direction of Rzączikov but without much of success.. 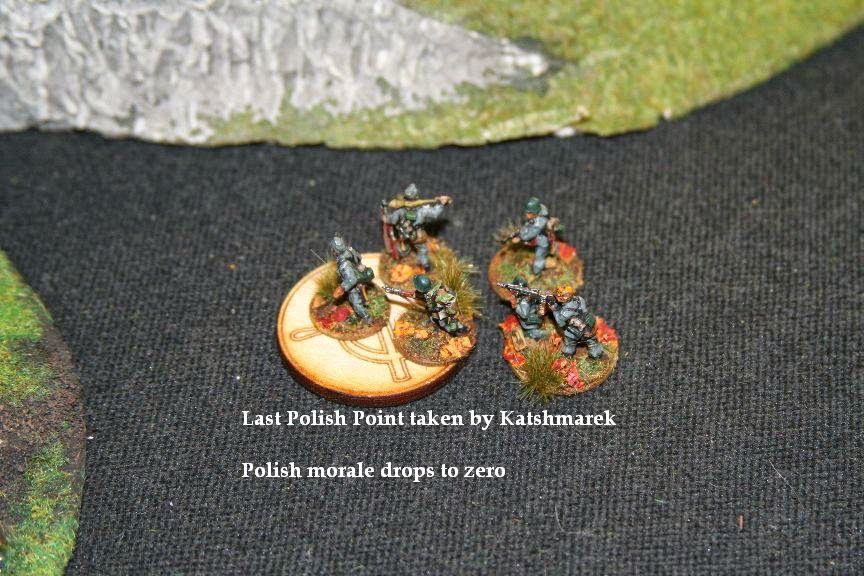 But Katshmarek saved the day completely cutting of the Poles from the Oder and breaking their morale.

A we forgot to take photos from longer perspective i created a little map with movements.

Victory for the Germany but..
I lost 16 man from my platoon in the process..
That means that I will play next game with only 18 men.. and 4 men will return from the first aid point after the second game. So it seems I got carried on too far...

I should fight from much further safer positions. But Sarmor managed to come really close with his 2 squads and concentrate fire power on my.
Some sweetens was instant Iron cross for Katshmarek after the game. He deserved it.. Captain took his own and put it on brave feldfebel.

After the game Polish side lost 8 Dead 2 broken and fled and one in the captivity (but only 8 dead came form the Platoon itself.)
But when we checked what happens with cut off squads results were a little more equal.
poles lost 4 captured including Sergeant Xardasov and 9 delayed (unable to participate in another campaign turn while stranded and lost. So Sarmor decided to use one of his 2 Platoon swaps and send the first platoon to the rest.

As its one side ladder I automatically gave up the initiative (and get one free trench for a next game as I strengthen my defences) as a , but now I consider moving back for better position and some more trenches!!

See you next game !

* fair question on historical accuracy is - Do Germans used Pancerknacker teams in shape given by CoC rulebook in 1945, I don't have definite information anyway, but they used many LMG team in the defensive so it will count as one
Autor: AWu o 09:26 Brak komentarzy:

Through Oder with the 1st Army: Chain Of Command Campaign 1

We started to play our first Campaign in Chain of Command.
Here it is Intro with the 1st scenario

Its standard Chain of Command ladder campaign based on historical battle fought in April 1945.
Here is campaign map: 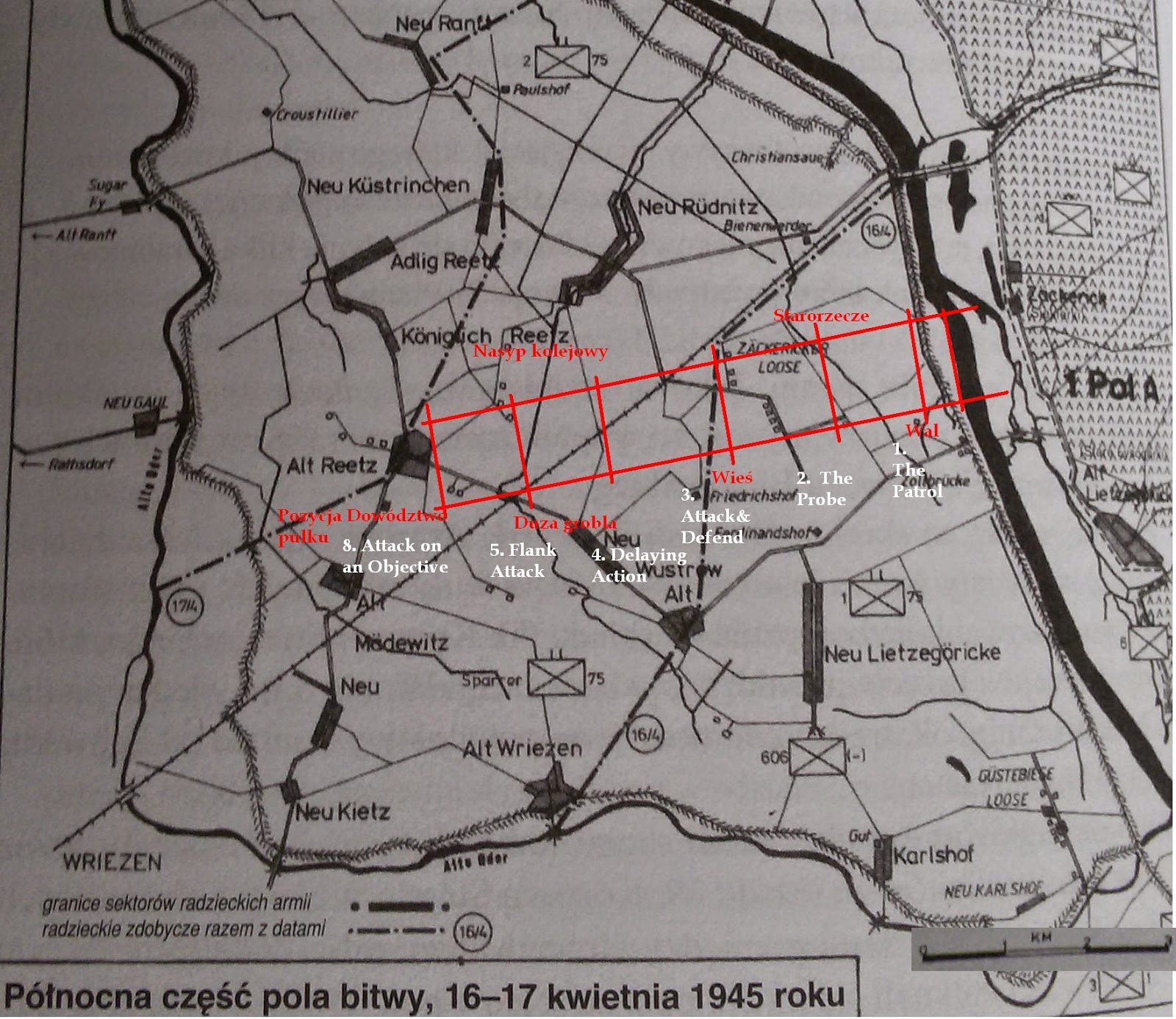 Map from Tony Le Tissier : Zhukov at the Oder (great book - I highly recommend - mostly at higher level but there is plenty of stuff for Platoon to Company gaming) 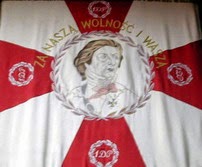 : Platoon from 1st battalion 75 Light Infantry Regiment – 5 Jager Division
Platoon is Regular, 5 command dices
German side is short on reserves. Once per campaign it can call for reinforcements (from Luftwaffe support personnel) by normal rules.

Polish side is attacking in force, twice during the Campaign Polish player can exchange his Platoon for another new Platoon from his Company.

It is .. After greatest artillery barrage of the war the last attack started. Soviet and Polish armies open offensive to on whole front. 1st Polish army is attacking between 61 Soviet Army in the North and 47 Soviet Army in the south  at North sector. It has to cross and attack west to Wriezen and Alte oder.
Our division main task is to establish the bridgehead and reach Alte Oder.
1 Regiment established Brisgehead near railway bridge. At 1500 2 regiment will cross the from Siekierki (Zackeick).
Your Platoon act as a first wave- it is tasked with scouting German position and establish a land for bridgehead formation later that day.

German Briefing
It is .. After greatest artillery barrage of the war the last attack started. Soviet and Polish armies open offensive to Berlin on whole front CI army corps is defending north sector of the Oder front. Our 5 Jager Division is positioned between Neu Glietzen in the north and Alte Oder at the south. 2 nd battalion of 75 light Infantry regiment is positioned across Zackerick. We repulsed polish scouting action yesterday, but main attack is anticipated today.
Units were withdrawn to safety before artillery barrage, but now we have to reclaim first lines of defense. 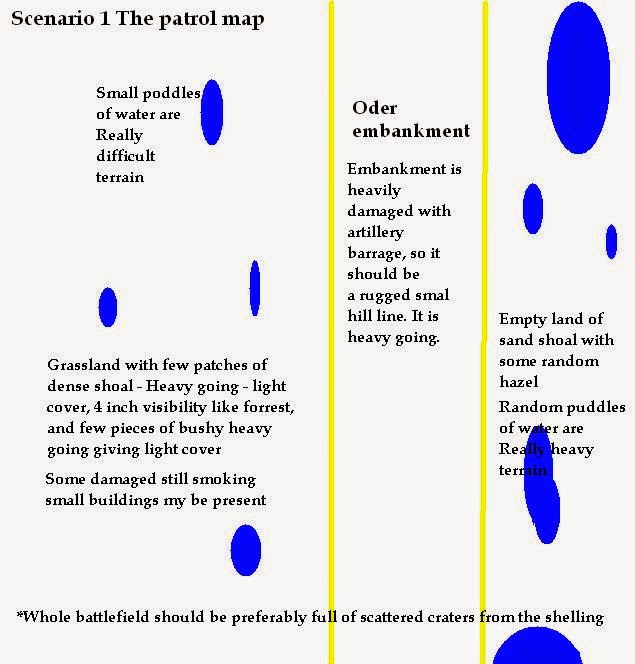 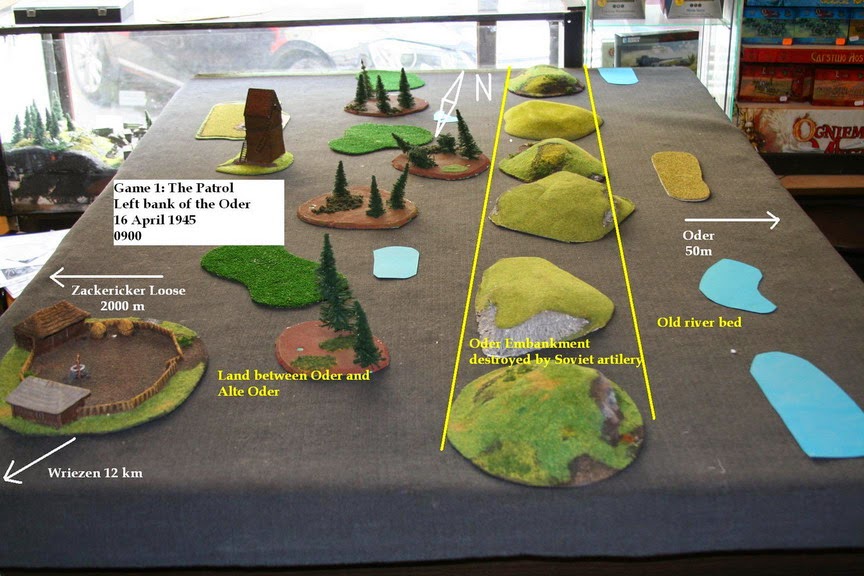 3 strange figures from the Japans past

I got them once in large bulk auction from ebay. I bided for roofs of Epic buildings but got some strange extras in bulk. Between old crap and bad painted beaky plastic marines were those 3 guys. Well they are obviously Japanese, and they had Grenadier 1986 stamp on their bases.. Thats everything i know about them. Models are not outstanding but after painting they look sufficiently cool to be fighting in Ronin when I will place order for Perrys Samurai someday.  Behold Angry Three from Kioto. 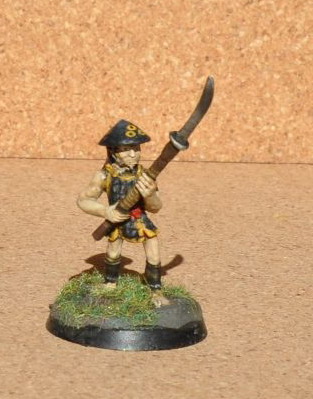 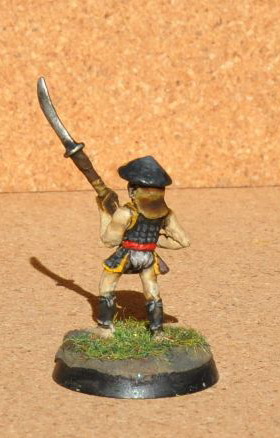 First one with naginata 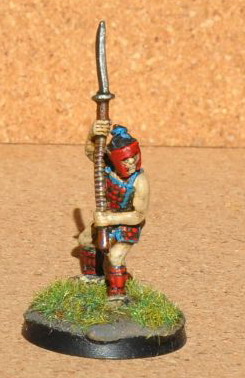 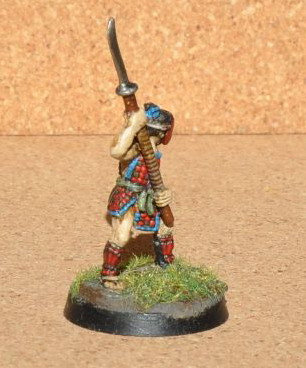 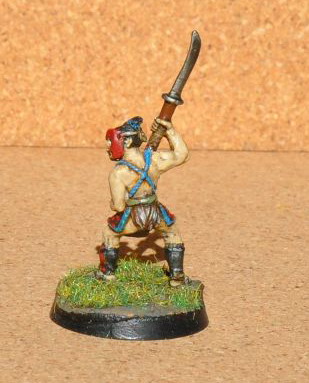 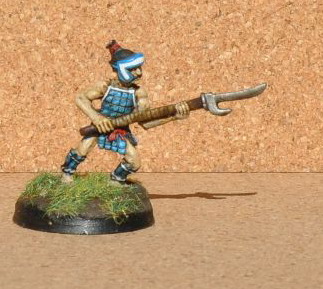 And the third with you guessed it.. naginata 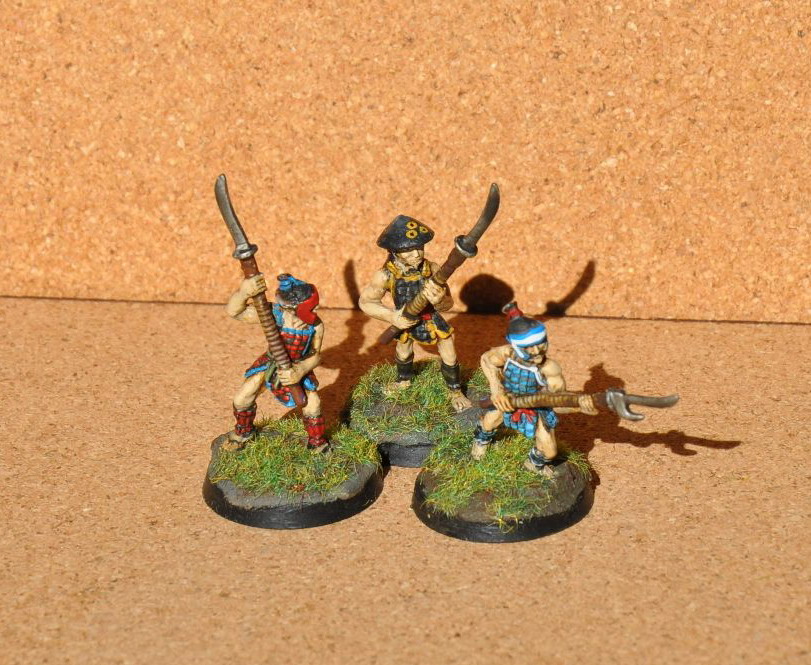 So you've seen all my Japanese miniatures to date :>