Tie Defender of the First Order

Lately most of my gaming was X-wing miniatures game. Great little game that I actually liked to play in tournaments (and I was keeping distance from such way of playing games for many years as I believe it does not suit well most of the miniature games - especially ones I used to play)
But X-Wing is different, demanding, close and more similar to card game in the way your brains operate than normal tabletop wargame. It wont be everyone cup of tea but its worth giving a try...
Especially those painting-challanged as the miniatures tor X-Wing are pre paints (and very good pre paints they are)

Anyway back to topic. Here is my first attempt into repainting X-wing miniatures as sombody used to painting will want to put a mark on any miniatures he use :P
I recently fly squadron of two new order Ties (They are in a scheme from the new movie so have reversed colours) and my favorite Imperial ship Tie Defender - which comes in either dark grey or red paint schemes. I wanted to unite squadron and differentiate Defenders (as I like to flow them in Three Deffender squadron which makes for two greys and one red ships) 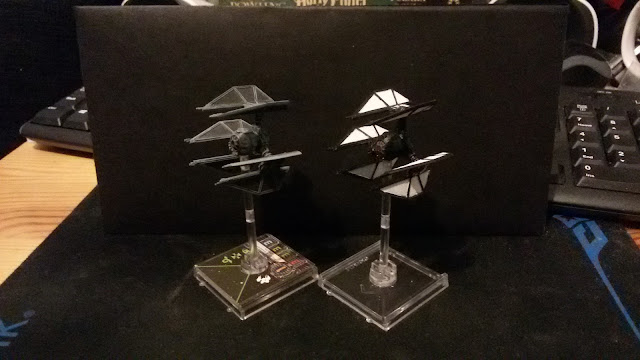 This was not very easy as the ship is basically made of almost flat panels separated by deep but small beams that ought to be black.. White was easy as I spraypainted panels white and gave some highlights in more white. But the beams were pain in the ass (to be honest they should be retouched in few places but Its playable for now). I am ok with how it went although next time some cooler ship with easier details. 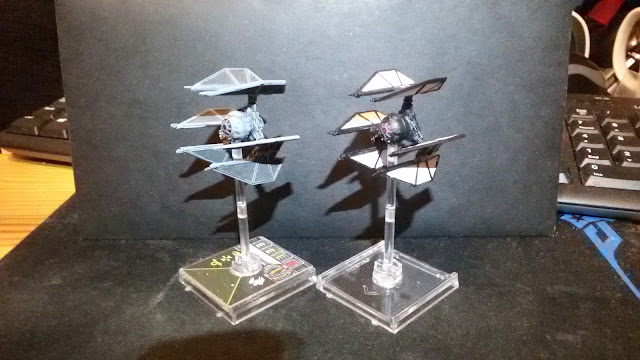 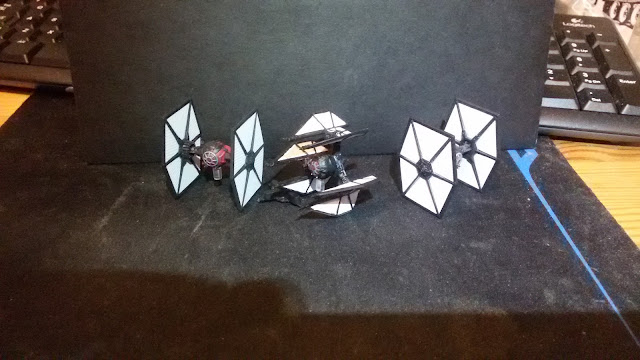 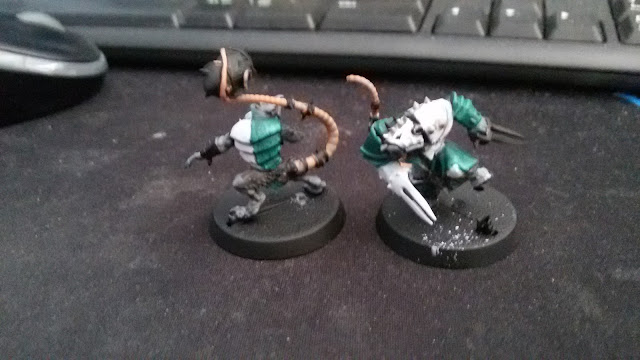 My  late discovery (well not so late perhaps as I was given free steam code for BB computer game and love it from here but late tablewise) and love.

Blood Bowl the game.. 2016 edition (but its almost perfect port of previous Living rulebook rules - ie 3rd edition Blood Bowl game with refinements that brought it almost to perfection.
But what Blood Bowl lacked in was miniatures.. Lets be honest old BB models have some charm but are not too atractibve by modern standard of miniature gaming.. Ohh how fat with great models we had grown :)
But 2016 re edition set comes with two insanely good teams - Human (Human- most boring team with unimaginative models in existence is very cool now and usable in many conversions in Inquisimunda :O and perfect Orcs! And they are in glorious plastic.. Only minor gripe I have with them is bad position composition of the box team - to play them at optimal build you need two team sets. Team consist of 11-16 models so you have 8 models that you can only use in conversion if you buy 2 sets for each team with humans and Orcs (6 linemen and 2 throwers both). That can be somehow remedied by conversion but is quite annoying never the less.. but thats GW evilness I guess (they are totally different and almost fancentric company since latest Warhammer community team restart after Kirbys departure from the company but still evil greedy corporation from hell).
Dwarf team soon followed the initial release (meeeeeh) but then after some time here they came.. My favorite SKAVEN!! Both in plastic and wit annoying lacks again but heeeeey thats why I hoard such bitsy box :P Lats  month another plastic team arrived - Goblins - but it have more issues.. complete lack of positional players - they were released by very uninspiring Forge World models only and not all of the needed set.. 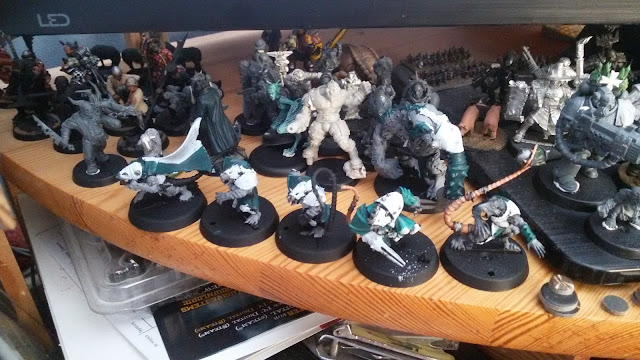 I was always moving BB buy in time despite securing plastic Rat Ogre for my then future Skaven team (Rat ogre is made by Forge World only and is again quite uninspiring) but lately my friend bought Box as impulse buy and we gave it a try.. What a bloody fun. I havent been really excited by miniature games in 20 years.. Real emotions real stress.. welcome to Blood Bowl ;P
I will do blog note with my team when I will finish them. But here are some photos of the half painted ratties in action 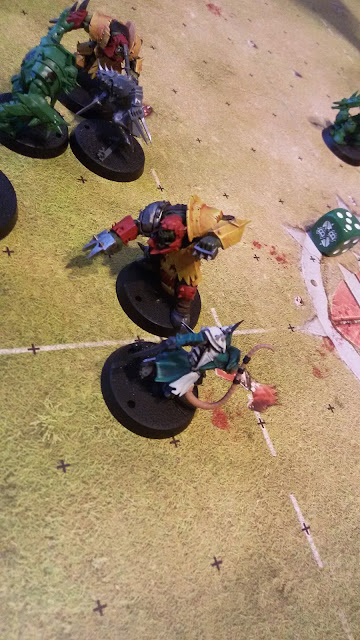 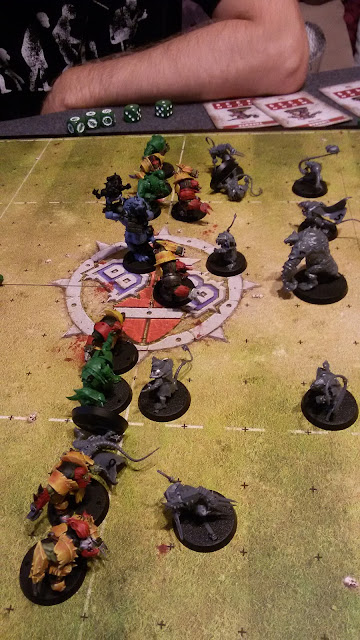 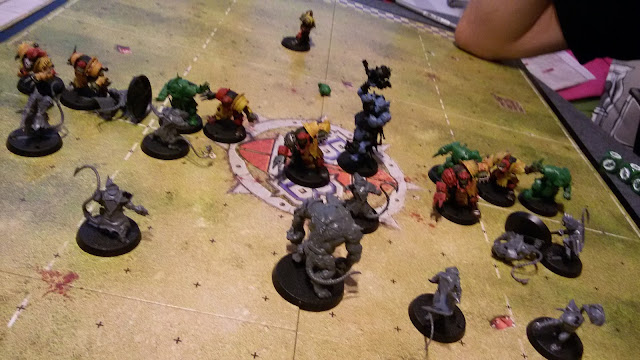 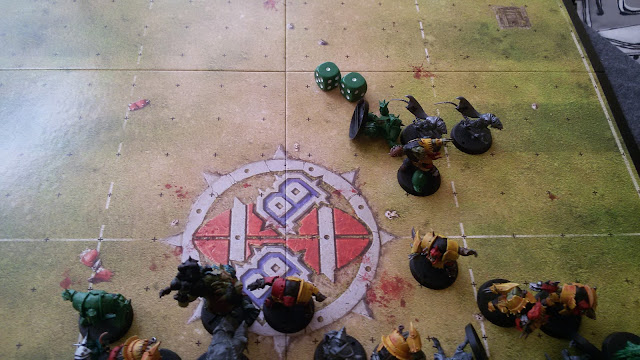 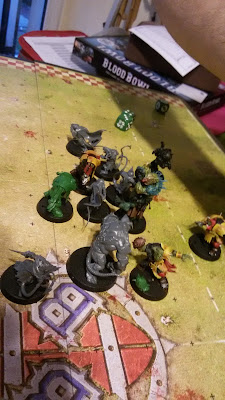 I lost my first Threematch cup to those pesky Orcs - Yellows Pruszków..

But my poor Szczurkan Kosaczew played underpointed (I did silly mistake and was short of a rerroll.. yea that the fault of it!!)

And I am thirsty for revenge!!

Necromunda 2017 looks to be a great year for GW 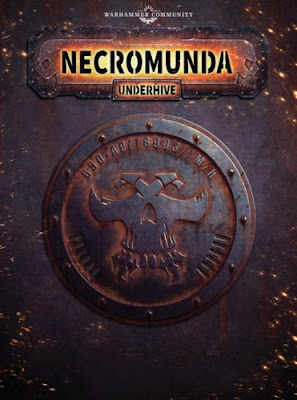 While models themselves seam to be painted and photographed to a lover standard than GW used to do.. I love them 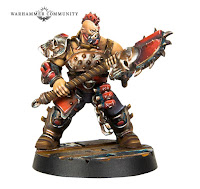 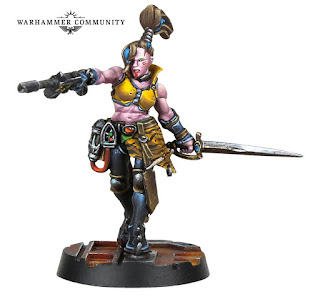 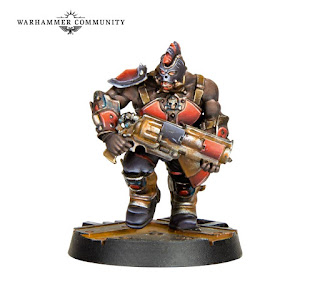 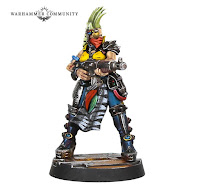 Starter set will have Escher and Goliath gangs.. Escher are my first gang and all time favorite.. I hated Goliath - mostly because of silly over muscling and bad models in original starter set bot later learned to appreciate their campiness..  Those Eschers fits nice style vise with Jess Goodwin masterpieces but Goliath are much more brutish and serious than Glam bodybuilders wasteland nomads of the 80 ties - of the past. I like them very much and they will fund myriad of uses in Inquisimunda. 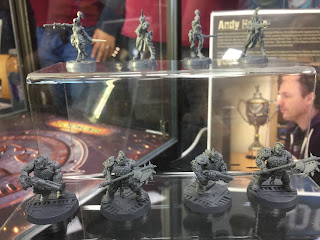 And promo flyer as extra bonus 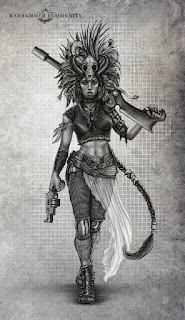 Game itself will be based on 8 edition but with full stat line.
That means simplified close combat. Unnecessary IMHO.
One thing they mention that is interesting is Model based activation.
IGOUGO is worst element of Necromunda - unattractive in skirmish gaming. Vague info about activation roll and Leader making activating easier (either influencing the roll or allowing multiple activation Frostgrave style) is not enough to decide if it will make game better or worse.. But activation is one thing I am experimenting with houserules (lately with card activation).

Anyway.. If the game itself will be unfunny.. We will play my beloved Necromunda. Either Original first or Community. But the miniatures will make wonders for Necromunda renaissance!
Autor: AWu o 06:15 2 komentarze:

Since my last post a big bomb struck WH 40k community. 8 edition. While the game itself is of no interest to me.. New starter set Dark Imperium was...
Ive bought it on the day of premiere due to great models inside.. And started to play with Primaris marines and Poxwalkers :P What a beauties they are :O
Here are my 3 truescale / artscale Black Templars made from Primaris.

I struggled how to make them more Templar at first, apart from the paintjob. After carefully looking at BT miniatures and art I went with chains, emblems at the sides of the chests and to spice some extra grimdark candles and torch in iron ring on the sergeant

Those guys will be heavy contingent for Ordo Hereticus Inquisitor yet to be named. I am doing some kind of military arm to each of my planned Inqisitorial retinue and Templars somehow fit perfect with witch hunting and heresy purging :> 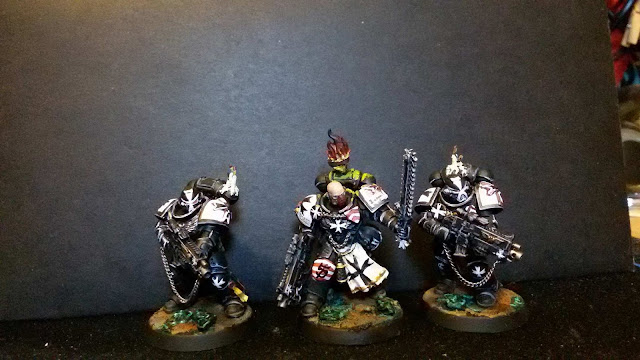 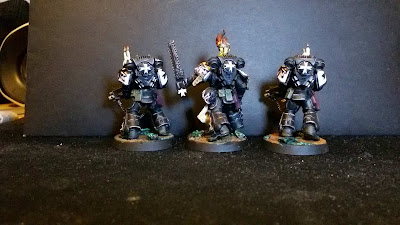 I will add some more photos when I will manage to photograph them better. Somehow those guys just dont like to be photographed :)
Interesting observation.. Sergeant photographed much better before painting. 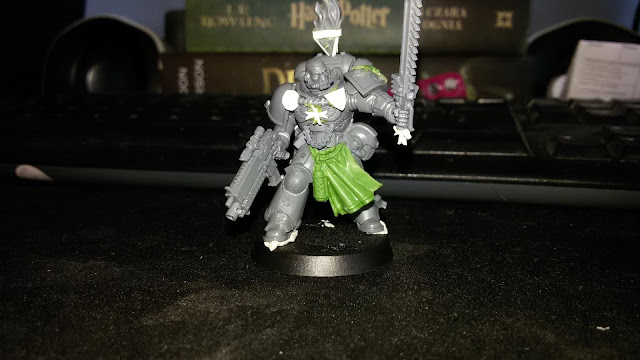 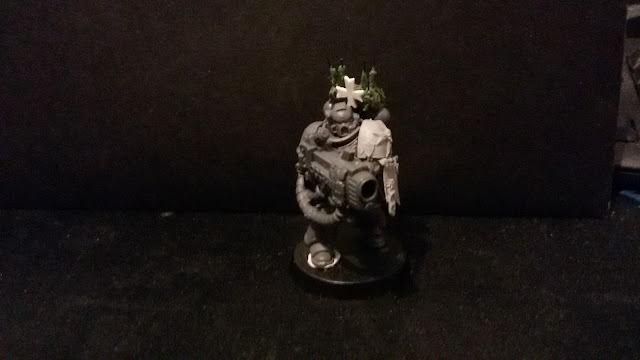