As I mentioned in the earlier posting I was very Inspired by Outgard project that was/is running bu few very talented individuals mostly from Scandinavian countries and decided to gather my Outgard Inspired stuff into my personal mini project.  I wanted something similar that could combine many different groups of my miniatures into one middle ages after fall of the civilization post apocalyptic setting. And that how without much thought put into it world of Patalonia was born.

A world fallen but not quite forgotten. World that is visited each time in the decade by Black ship Crimson Angelus - great event that prompts all Patalonians to organize witch hunts for quota of psykers needed to be sacrificed to ever hungry spirit in the sky. Due to collapse of the industrial civilization on the planet tithe is nominal and gathered very rarely, but chartist captains are visiting the world regularly around every other year bringing industrial produce of closest Hive World Anubis removed by 3 months void travell.
Those two great events in the world of the planet are happening in the Old Starport - mostly ruined last stand of civilization of  Man on the planet.

Here travel riverrine convoys of Black Steamships and Free Oarsmen Brotherhoods from the Fellburgh in the west by means of Great Green River and from the east by Great Eastern Railway last heavily armored trains from Stahlburg.

Fellburgh is the formal capital, and seat of planetary Lord - Count Theodore von Stern. His domain is a former shadow of itself and compromise of 9 Houshold baronies. It is surrounded from all sides by fallen housholds - strongholds of deviants and renegades, witches, warlocks and mutants - enemies of the Man. Further to the east and surrounding Old Starport lies Sulphur wastes - a jungle-swamp desecrated by old industrialization - full  foulest mutants and beasts.
Even more to the east lies Purple Spire.. Long lost hive city which real name is long forgotten. The hellish place is ruled by Count vonStern dark counterpart -dreaded Goat of Darkness... ever plotting the fall of the Man.. Looking hungrily towards Fellburg
Autor: AWu o 16:08 2 komentarze:

January was a mutant month for me.  I acquired cheap Hobbit Goblins at last. I was planing using them as mutants for ages. They never looked to Goblin to me, but scream Mutants! 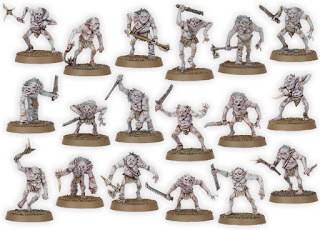 Seriously mutated bunch..I guess most mutated miniatures GW ever did..
(BTW:I would kill for them in proper 28mm. They are needed second only to Slanagors in plastic)
Mine were second hand and badly painted. But they were already stripped and I didn't care about perfect detail in the places that paint stuck as they are unwashed mutants after all.. and they costed 1/4 of their original price, all 18 of them sans 2 bases. Good price if you ask me.
I wanted them for a filler in games (scavenging in some holes as background) and as lesser enemy for practically anyone. They could work as coerced or bribed  labor or warriors for some unscrupolous master.. no difference for them if they are needed as King Redwart followers,  as diggers looking for PKBtron or as blunt force needed to bring Fallburgh to its knees... 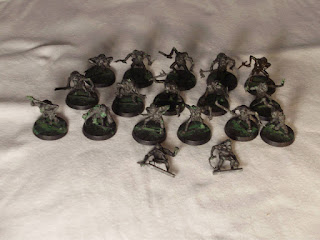 After few days of work I painted test one and The Indifferent Mutants were born.
(Indifferent as opposed to Mutants dedicated to any higher powers like Slaanesh that my main Mutant mob is dedicated. Those guys are non-aligned and murderous for survival and mutant low minded cunning and cruelty) 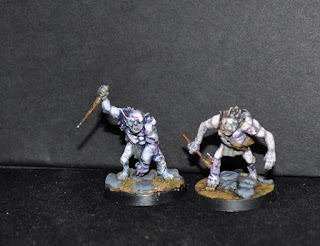 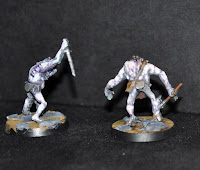 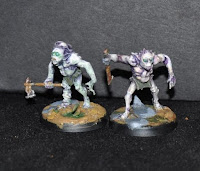 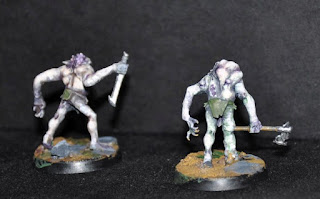 Then I realized that they are to degenerate and has to weak posture to pose danger to armed bands. So I did what I was planing for a long time. I disenchant some Plagueberers and turned them into bigger mutants.
Starting with Violetta - Mutant mother 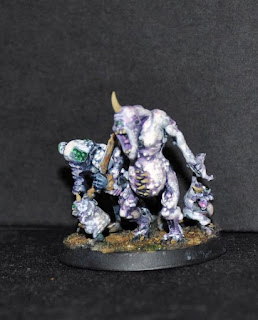 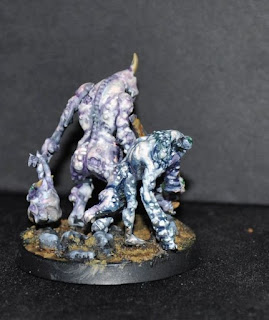 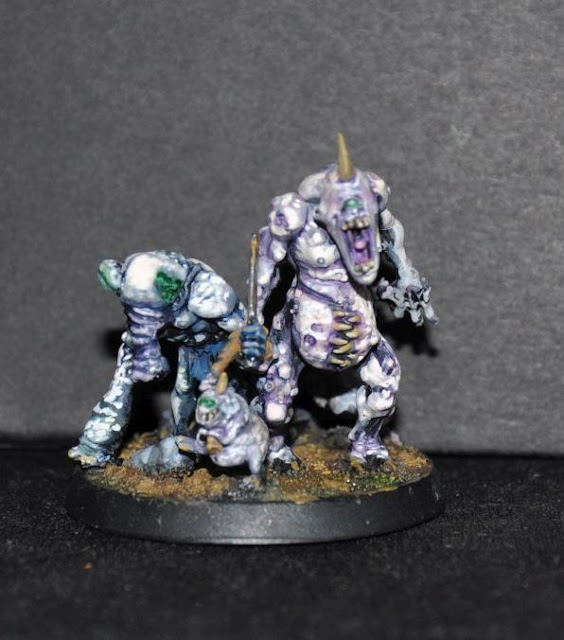 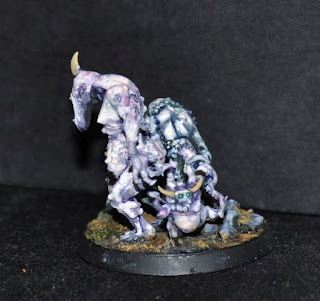 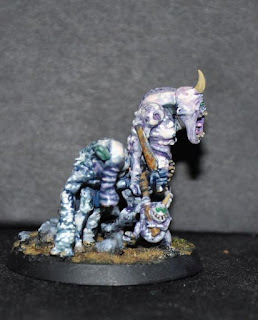 Violetta is mother of large brood of filthy degenerate mutants, she is accompanied by some of her youngest offspring wherever she goes. She drags with her one of the happy fathers of her flock.
I need to do few small basses of her offspring to follow. And Mutant king of the Sulphur Forest.
For now I started to work on few more smallish mutants (with light river theme) and some bigger guys and gal -  another female carrying her  mutant offspring in the kangaroo style hole in her belly :) 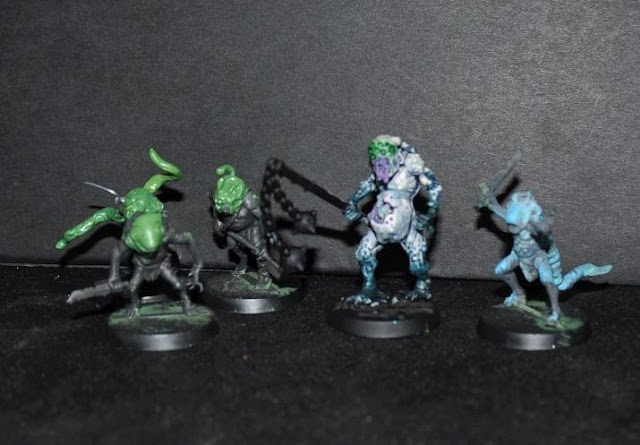 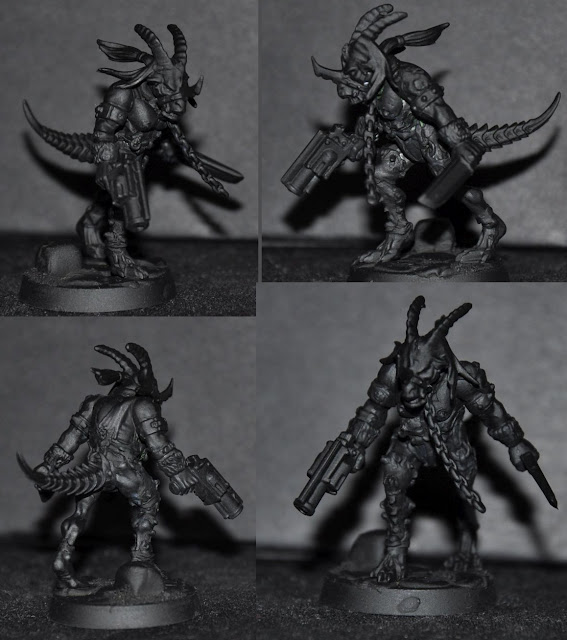 I will post update with guest star Slaanaeshian Mutant and few more soon.

I am creating new tag - Patalonia - Patalonia is a forsaken Feudal World I decided to work as a idee fixe of my techno-fantasy styled models (Akin to great project of Outgard - go and google it if you don't know it yet) Not surprisingly Sulphur Forest is located on Patalonia west from the Great Green River and close to the city of Fallburgh. 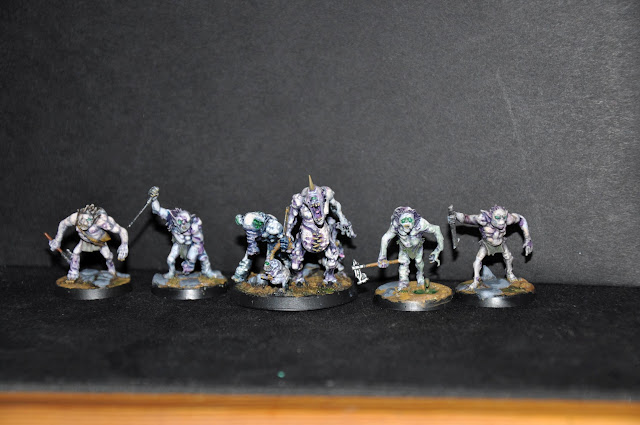 Today mighty ÆWulf will cross his sword with diabollical enemy for the first time.
Kadzik will teach mo to play Lion/Dragon rampant.
He will bring his slightly fantasy Arabi wariors, and I will ride with my Wikings +.
While I finished 4 points of 2 Warriors units , 2 Hearthguard units and Warlord for Saga, composition in X Rampant is quite different so I had to recruit my wives Wulfen (she painted one of them 10 years ago in short spike of interest in painting miniatures, and Ive put some basic colors on the other two that were gathering dust undercoated.

I will have 1 unit of Elite Foot -  ÆWulf himself with his chosen.
Unit of Cunning Greater Warbeast
2 Units of plain Heavy Infantry
And 1 unit of 6 Bidowers/Scouts
and 1 point I dont know what to do with - most probably I will make one unit Hate enemy.

More photos after the battle. 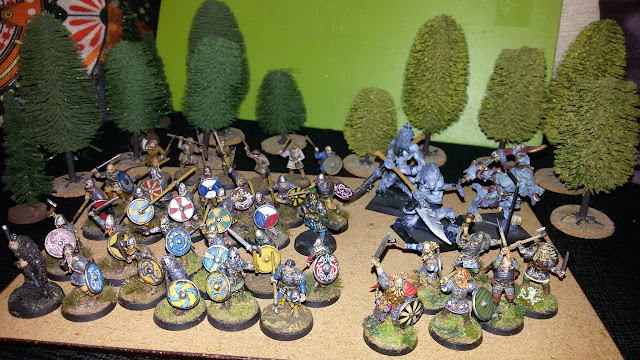 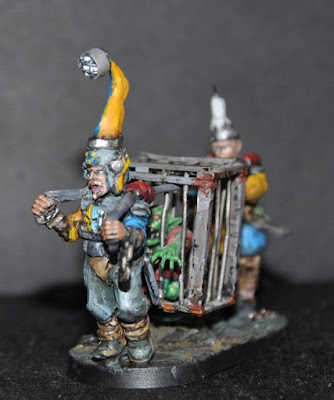 Finished piece from previous post.
(well maybe I will touch the base a little as roaches could use few touches and lighter background but its almost finished ) 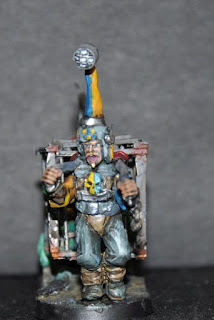 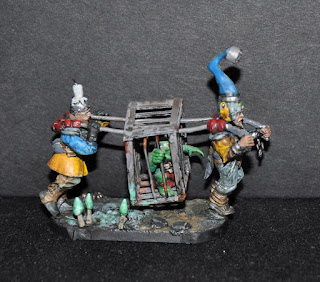 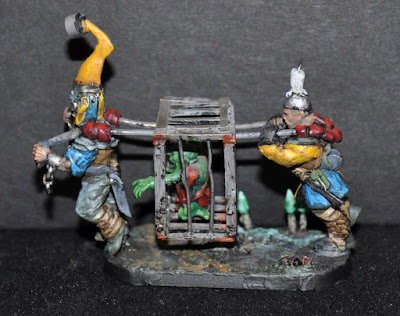 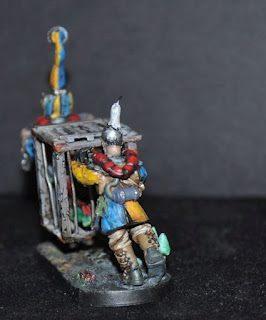 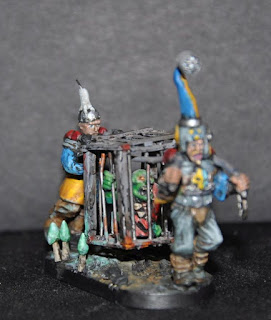 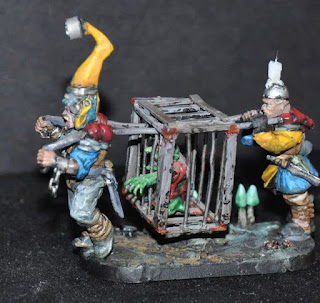 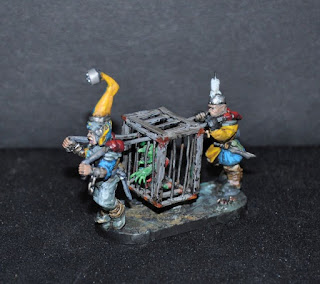 All models built with intention of being part of the caravan in different stages of finish.
Pit slaves needs just bases (and one will have new head as I am not happy with huge helmet I built) sam con be said about mercenaries (part the head of course) and the rest need paint badly. 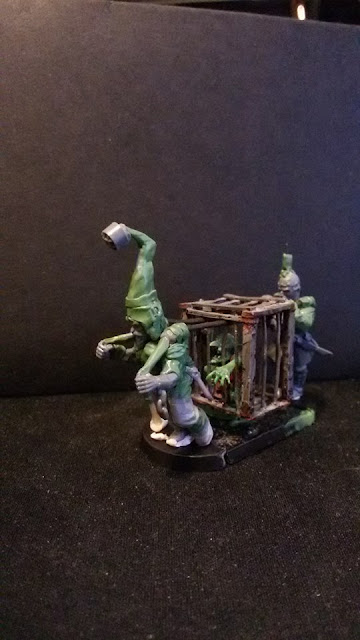 As I am in the 40k frenzy now I finished foe more pieces I will show here soon.
And of course I started much more pieces.
I guess I am starting 2 miniatures for 1 I manage to finish.

But I will start a year with finished models. I home I will be able to paint sone soon.

Porters needs some work on the base and they are ready for painting.

Guilder need some pet, not sure if servo skull or some space animal.

Master of the security - Pit Slave needs his most pricey possession - slave girl he won in some Pit fight of the past. 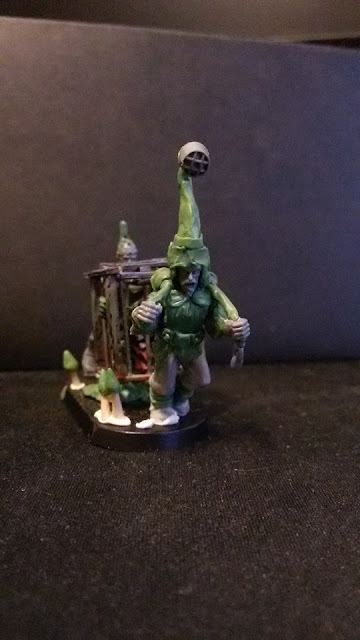 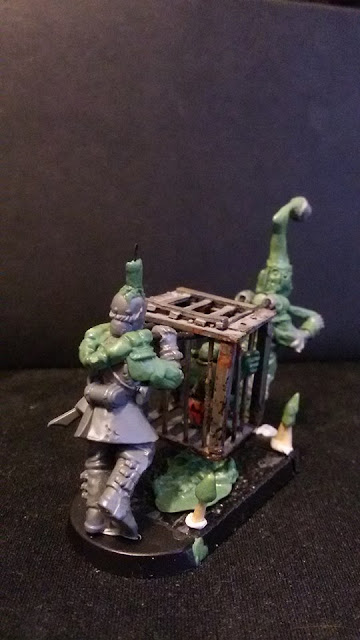 Ive found cool emblem as my guilder organisation mark that the Guilder put on his things. 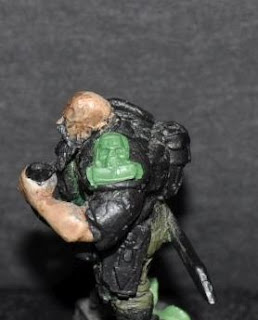 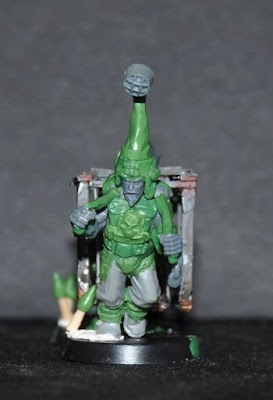 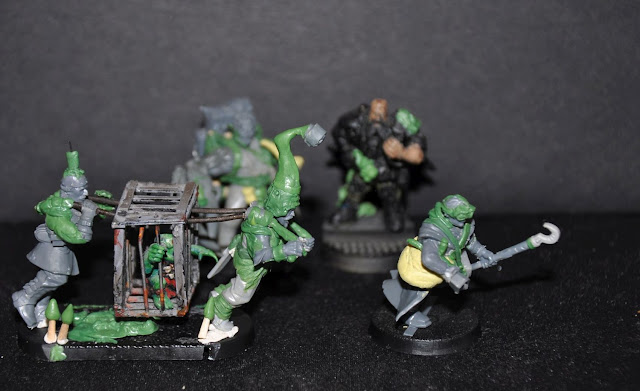