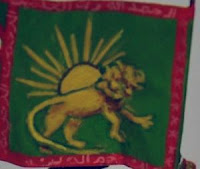 I've been painting for some time a magnificent set of Mirliton Mamluk/Arabic Commander. Its striked me he could work in my planned Eastern Army as a Mughal CinC. I haven't decided what to do with him - Should he be Mamluk, or Saffavid Persian.. until I fancied to try and do a Lion and Sun Mughal banner. They work well together. Soe he bacame Babur first Mughal Emperror of India, Conquerror of Dehli Sultanate. Scourge of the Lodi. I wonder when he will get his army, but lets hope that sooner than later :) I have to found best model for historical accuracy and high level of multi servility (I want to use them in many armies as a non competitive player myself - and lets be honest there are no competition in Renaissance 15mm wargaming in any vicinity anyway - i will be playing mostly historical scenarios.. I hope that first Panipat will be in 2016)

As the victorious general (Me :) once said
God is on the side of big banners :) 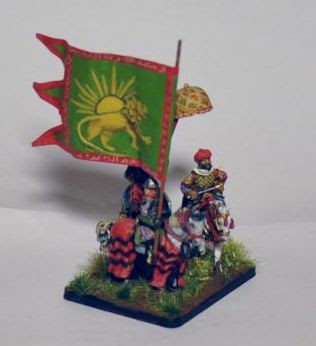 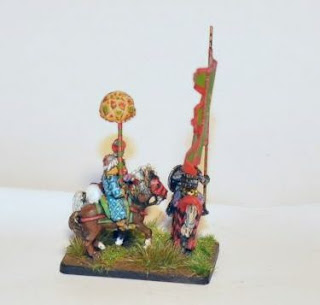 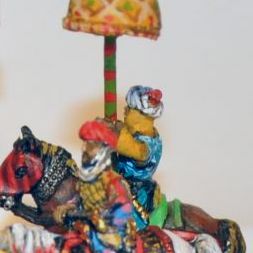 And WIPs of a banner I had more fun painting than Babur himself :) 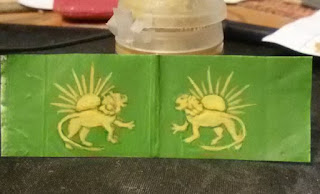 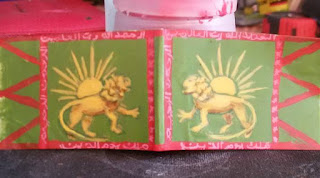 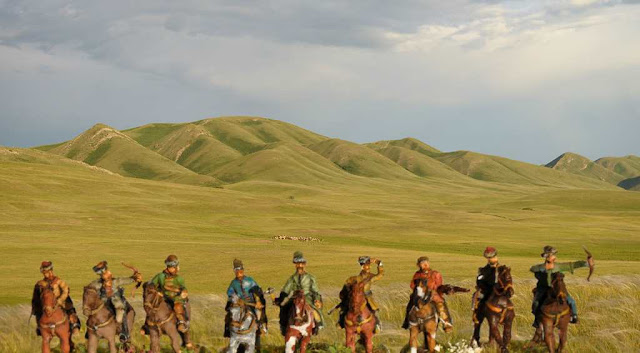 Big step in my quest for national cavalry (very lazy and long quest). 3 bases banner of Wallahian late cavalry. Took longer than expected due fo my dislike of the formation, but after reading a book on them they grew on me and so are finished. Now only Commander and last cossack banner to finish playable lowest force level (skirmish force) for With fire and sword rules.

Wallahian cavalry was in the beginning was rised from people of Wallahian (Moldavian) descent that were settled in southern Polish-Lithuanian commonwealth in Crown parts of the country. It duty was similar to Polish Tatar cavalry (that was predominant in Lithuania and Cossack cavalry [not to be confused with Polish cossack cavalry] in Ukraine). Mainle recon and supporting roles. Although such cavalry was very vital in fighting with Crimean Tatars - which were one of most notorious enemies of the Commanwealth. It gained prominence especially after rebellion of Polish Tatars in 1672. With time ethnical composition of Wallahian formations changed with Ukrainians and native Polish people taking place of the original mercenary Wallahians. It was mostly non-noble formation, with nobles sometimes serving in the leading roles, but service in Wallahian banners led to many nobilitations (mostly for officers of course). main weapon of Wallahian cavalry was sabre and bow, but richer soldiers could be equipped with pistols or even longer firearms.
Overall not very exciting part of the polish army of the period where Hussars and pancerni taking spotlight positions, but vital to Commonwealth army of the period.

And my whole national cavalry so far 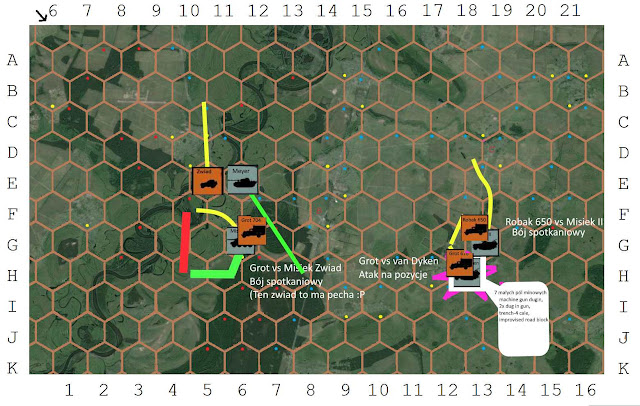 This turn will feature attack on a fortified german stronghold (after large artillery bombardment)
close by Meeting engagement, between matching forces and second round of beating of poor german recon - this time both parties are surprised in a meeting engagement. 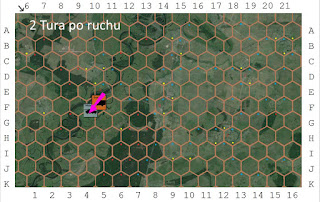 I am moderating campaign for a group of fellow gamers from Silesia.  And I will try to use this blog for a central visibility hub for both sides