A little inter cult activity intermission for something completely different.. The French!

Richard from TFL is running a Sharp Practice v2 deployment point competition.
So this prompt me to realise idea I had in mind for a long time. A little dioramas of soldiers robbing boots of the fallen enemy - a common thing in war especially or badly supplied Army of Italy .. My badly supplied units are still in wip stage but why not try to make test miniatures and use in competition too! Win-Win.

So, here are the rules:


They are a little vague but - lets be honest I am not the best painter around so chances for win are quite slim anyway but potential prizes very tasty :P
So I chose  to have fun
My first deployment point is called  (Yes i gave them proper names hoping for extra unscientific points in the competition :) Vive la chaussure! 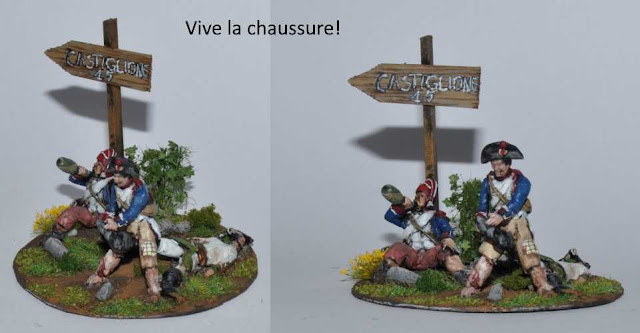 As all of you surly fluent in French will see coming it portrait glorious if grimmy job or freeing nice officer boots from Austro-Hungarian occupation! And drinking some wine in the proces.. those guys are Frenchmen first revolutionaries second..

Second one I had more problems.. I didnt want to copy the death robbing concept nor do simple furage gathering so Mort aux ennemis de la France was born

Grand battle may be won but everyday there is next battle ahead and so we see it.. La dernier combat between a man (a FRENCH man) and a chicken (soon to be a french supper) .. And eating some fine previously baked chicken leg in the proces.. those guys are Frenchmen first revolutionaries second..

Here are they together 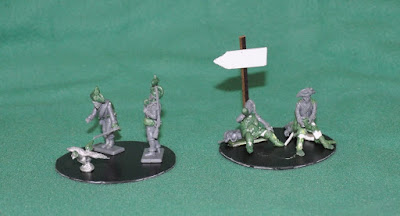 And some field photos 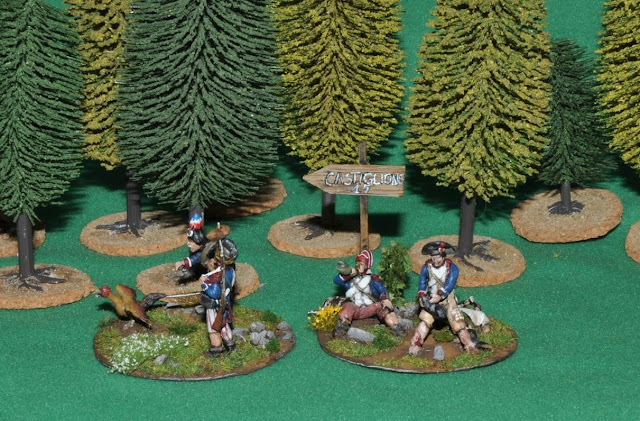 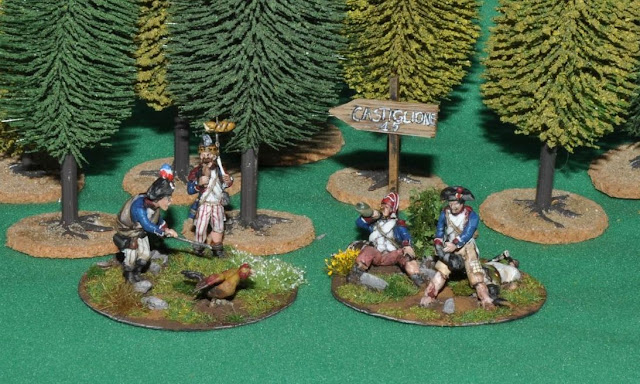 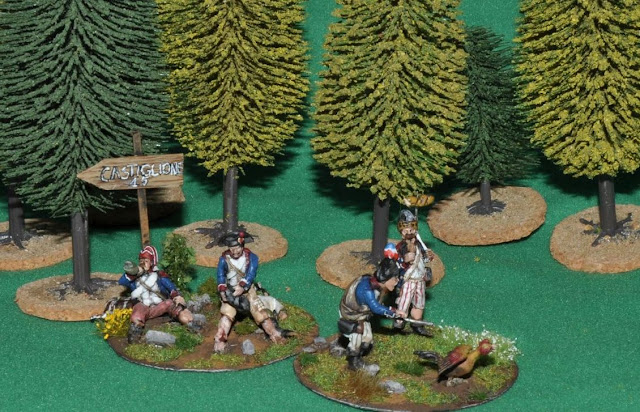 Stop right there in the name of France!! 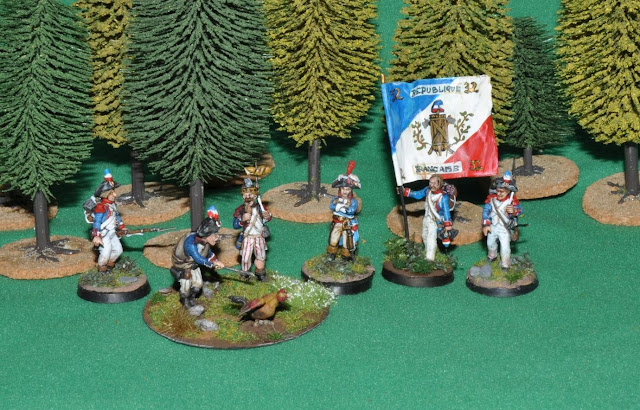 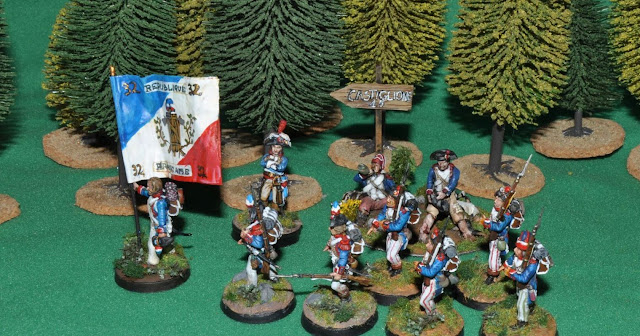 Hurry Up men.. Wurmser had more boots at Castiglione 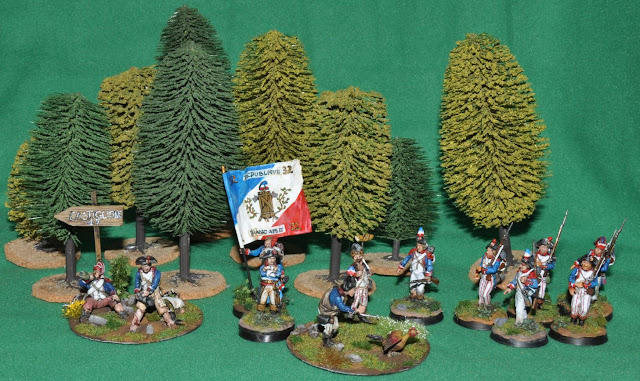 
*I apology any inevitable Frenchman that will stumble upon my Frenchlish.. :)
(Especially Tango01 that will see this sooner or later..)
Autor: AWu o 13:55 7 komentarzy:

The Dark Ritual at Sewer 17 part 2

In this overdue installment lets take a look at forces of evil and chance that were a barrier for players and their dedicated combat groups! 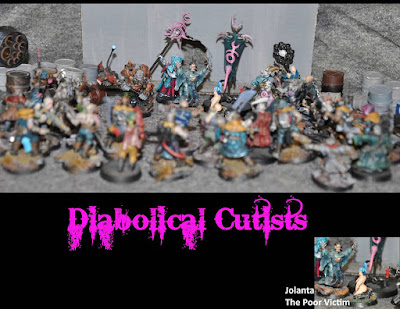 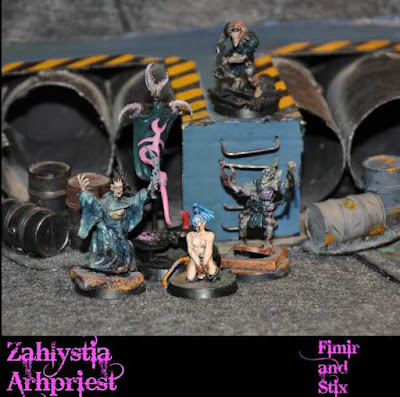 And most infamous deviants of the underhive 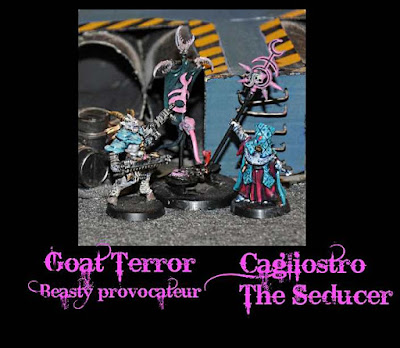 Goat Terror, a Terror of the man, a slayer of the children, a grand breeder of the down under and Cagliostro the seducer - powerful psyker 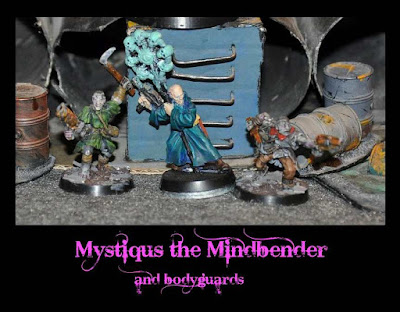 Mystiqus feared telepath and his henchmen 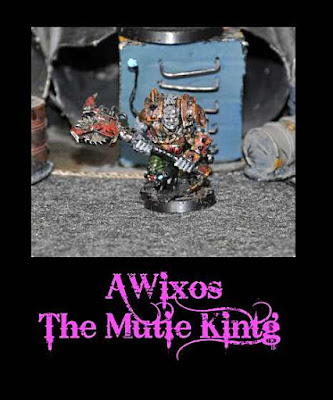 Each one was a nemezis for one of the player characters.

they commanded horde of lesser henchman and scum
Church attendants 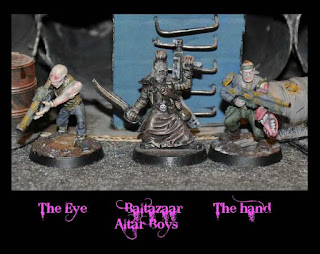 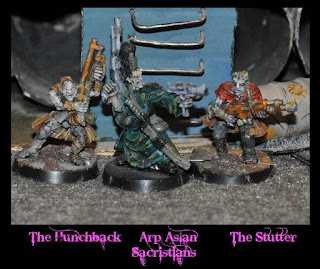 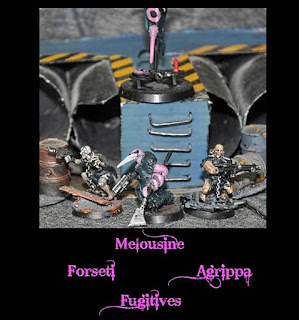 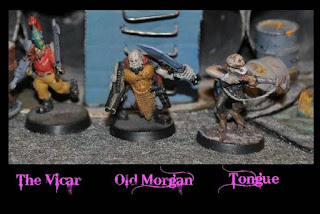 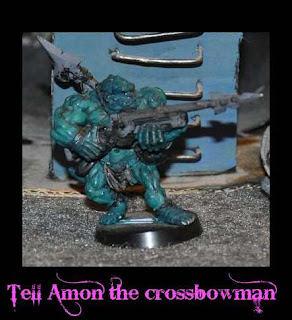 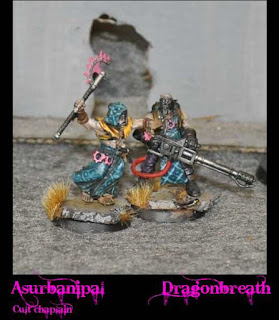 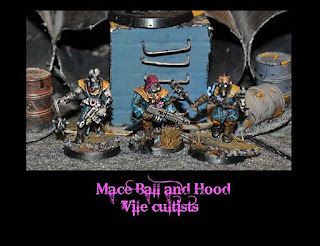 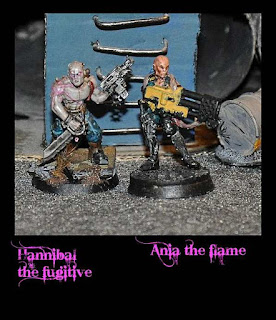 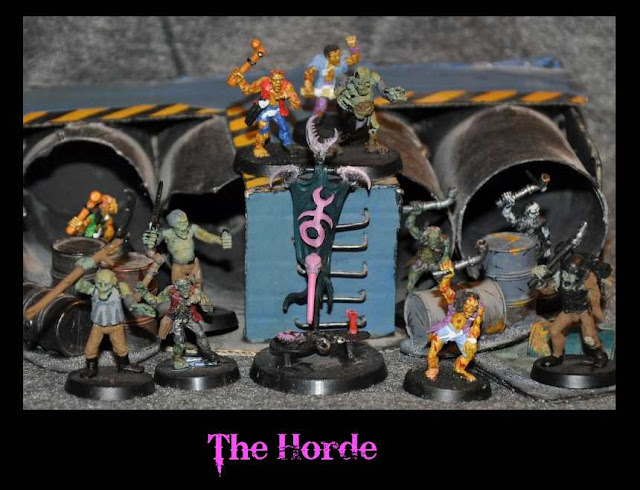 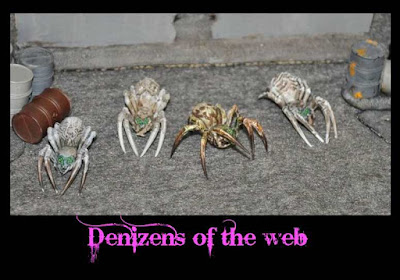 The Dark Ritual at Sewer 17

I almost forgot about mu blog since march (real life and not many finished projects.. :( But I managed to get a few friends two weeks ago and play my favourite Necromunda with a multiplayer cutist twist.. I will post few info about the rues i modified slightly (card driven turn sequence instead of IGOUGO i think is weakest part of Necromunda) and battle report in few days.

Now here is a teaser and cast of the adventurers

When you beloved girl is captured by dark cultist with unknown agendas.. There is only one thing a men can do.. Gather a team of trusted friends and take her back!! Thats what brave Romeon did!! 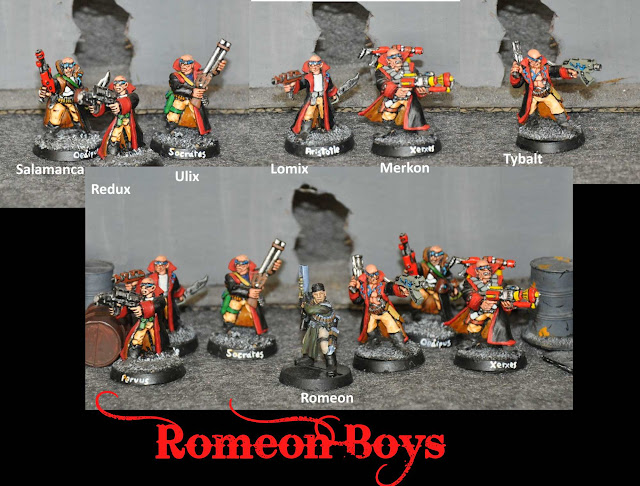 When your daughter fell into a bad company.. there is only one thing a loving father can do .. hire a band of ruthless mercenaries.. And thats why grim Judas got paid.. 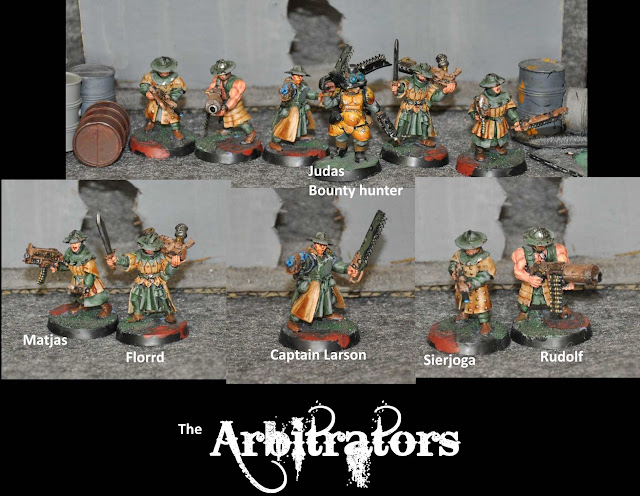 When your most promising protegee gets captured by evil cultist.. There is only one thing a priest can do.. Gather ruthless and yet pure covenant of brothers and make right to whats is wrong! And thats why Brother Albinus was made an Inquisition Legate for.. 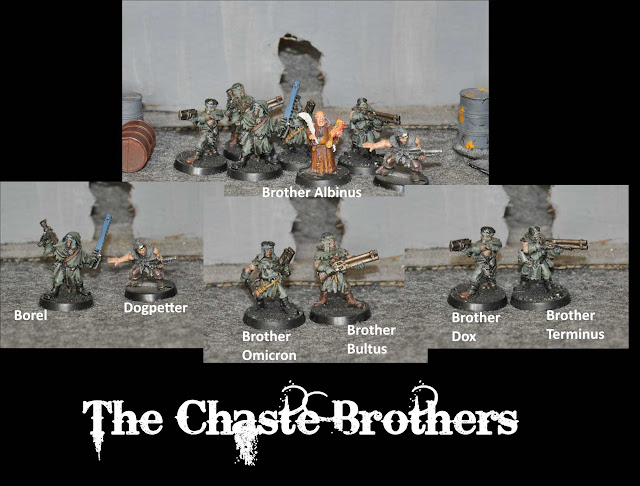 Because poor and virtuous Jolanta fell into  a bad kind of company.. 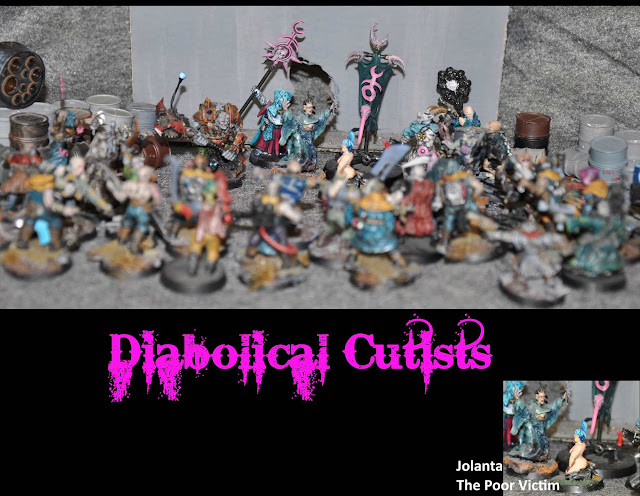 And what they will do when their conflicting missions will become obvious..
At Sewer 17!! 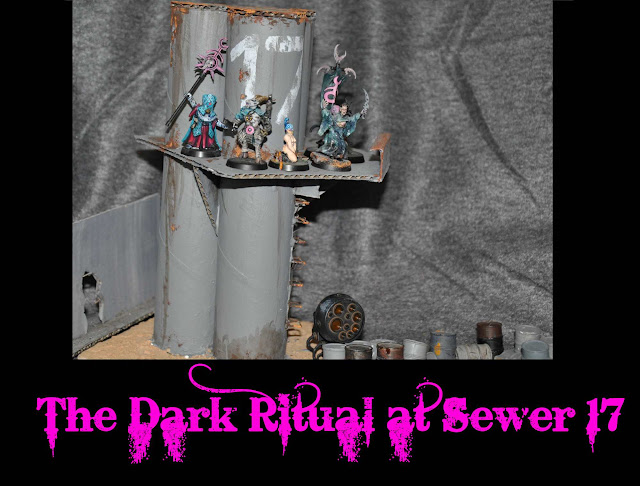 In the next installment - Diabolical Cultists and their sinister  agenda